The changes to education benefits for veterans in a new House bill are numerous, including the end of a 15-year... 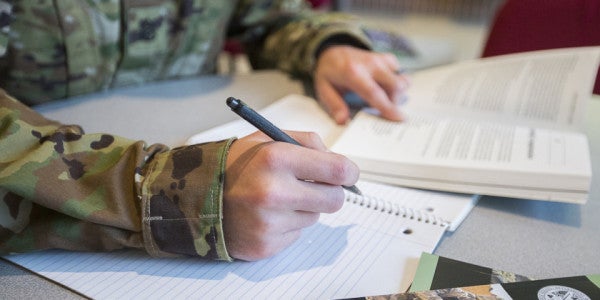 The changes to education benefits for veterans in a new House bill are numerous, including the end of a 15-year deadline for veterans to use their GI Bill after leaving the service, reimbursements for veterans whose schools abruptly close and boosts in aid for Purple Heart recipients, dependents, technical education and members of the National Guard and Reserve.

Altogether, HR 3218 combines 18 different bills and about 30 provisions put forth by Democrats and Republicans.

RELATED: A New Lifetime GI Bill Is Likely To Become Law. Here’s How It Will Impact Vets >>

Though the scope of the legislation is large, nothing in it prompted opposition or controversy Monday night, during a hearing that will be the House’s closest examination of the bill. Sixteen people testified, and all but one of the 24 members on the House Committee on Veterans’ Affairs waived their usual five minutes to ask questions.

“I think across the board when you talk to the people who work at the VA, this bill is an exciting bill for lots of reasons,” Coy said. “Probably my biggest concern is . Almost all of these sections require some degree of changes in our IT system, and that’s what concerns me the most.”

VA Secretary David Shulkin expressed his support for the GI Bill expansion earlier Monday on Twitter, saying it would “strengthen an important benefit used by many.”

The committee is set to vote Wednesday morning on the bill. House Majority Leader Kevin McCarthy, R-Calif., said Monday that he wanted to schedule the bill for a vote on the House floor within the next week.

“This committee has shown time and again a bipartisan way on how to govern. It’s an example for all of our committees and a model for our colleagues,” McCarthy said.

The legislation was put together by lawmakers over the last several weeks. Negotiations were reignited by a group of veterans organizations, primarily Student Veterans of America, following a rift between organizations in April about how to pay for the GI Bill expansion. Walz said it was almost a “death knell” for the bill.

The expansion is estimated to increase GI Bill costs by $3 billion in 10 years. To pay for it, the proposal now calls for decreasing living stipends to GI Bill recipients to fall in line with active-duty servicemembers’ basic housing allowance. The change would not apply to people currently using the GI Bill.

“We’ve had a hiccup or two getting where we are tonight,” Roe said. “Wednesday we’re going to mark this up and hopefully get unanimous consent.”

After the House committee introduced the legislation Thursday, Sen. Johnny Isakson, R-Ga., and Sen. Jon Tester, D-Mont., leaders of the Senate Veterans’ Affairs Committee, announced their intent to follow with their own version. A bill had not been introduced in the Senate as of Monday.

“If student veterans sat down to write a bill, it would look like this,” said Will Hubbard, vice president of Student Veterans of America. “We look forward to similar success in the Senate.”