A Vietnam Vet Faced An Unaccompanied Burial. Strangers Found His Family — And Showed Up In Droves

A Vietnam War veteran received his second funeral service with military honors on Tuesday, 16 years after he died. Two... 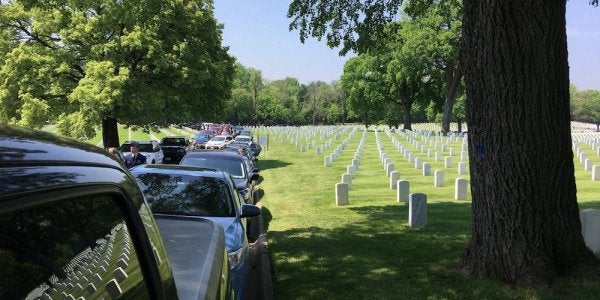 A Vietnam War veteran received his second funeral service with military honors on Tuesday, 16 years after he died.

Two hundred people turned up at the Baltimore National Cemetery to honor U.S. Army Capt. Larry Casey at what they thought was going to be an unaccompanied burial service for veterans whose family members cannot be located.

But thanks to the power of social media, Casey’s widow was located in Georgia, and his daughter, Leah Casey, was found in Texas before the funeral service was held. Both women flew into Baltimore on Tuesday morning to attend the ceremony, which included the presentation of the American flag to the widow, a three-gun salute and a bugler playing “Taps.”

@jaketapper This was made possible by a guy I went to high school with and the back story is amazing. Here's the post that for it started. pic.twitter.com/yHZfUogO5W

Though the funeral hinged on a misunderstanding, it turned out to be what the cemetery’s director, Michael D. Brophy described as “the best of all possible outcomes.” Casey’s widow, Jan Casey, said her husband would have been “dumbfounded and humbled” by the outpouring of support from the people he thought of as his “weird and wonderful family” of military veterans and law enforcement personnel.

Casey served in the Army from 1966 to 1970, Brophy said. After he was discharged, he went on to a distinguished career with what is now the U.S. Bureau of Alcohol, Tobacco, Firearms and Explosives, working at the Federal Law Enforcement Training Center in Glynco, Georgia. He died in 2002 at age 54 after suffering a heart attack brought on by a case of the flu, Jan Casey said.

A service with full military honors was held at the time for the captain, who was cremated. Jan Casey said some of her husband’s ashes were scattered on the training center’s explosives range, while others were disbursed at a site that includes a Native American burial mound. But a portion of Casey’s ashes was placed in an urn and given to the captain’s best friend, Joseph C. “Cliff” Lund of Severna Park.

Lund died in February. Later, when two of his friends were packing up his belongings, they found the urn containing Casey’s ashes.

Because Lund’s possessions included photographs of Casey in uniform, one of the helpers, Dave Fullarton, realized that the urn contained the ashes of a military veteran. Fullarton didn’t realize that the urn held just a fraction of Casey’s ashes, and he contacted cemetery officials for help.

“I couldn’t just walk away without doing anything,” Fullarton said.

When Brophy’s staff could not locate Casey’s relatives, Brophy announced the cemetery was organizing an unaccompanied burial service for him. Such services are rarely held — about 175 veterans are interred annually at Baltimore National Cemetery, Brophy said, and this would have been the first unaccompanied burial he had attended in the year since he was appointed director.

“We say that no veteran ever truly dies,” Brophy said. “We all die a physical death, and then when we’re forgotten, we die a second time. We want to ensure that no military veteran ever dies alone.”

Brophy and Fullarton sent out appeals on social media asking veterans to attend Tuesday’s service. On Sunday, that appeal was retweeted by Jake Tapper, chief Washington correspondent for CNN.

“That post went viral,” Brophy said. “The response has been huge. If 20 people attend a funeral, we consider that a large service, and for this one, we have hundreds.”

He was far from unaccompanied. Word got out and I’d say somewhere around 150 veterans, friends and loved ones came out. Great ceremony and wonderful tribute to a veteran. pic.twitter.com/nSoKXJqgwV

As planning for the funeral was underway, private citizens and members of veterans’ groups who saw Tapper’s tweet began doing their own research. One volunteer tracked down Leah Casey, a senior policy and budget analyst for the Texas Health and Human Services Commission, and passed along her contact information to Brophy. After confirming that Leah Casey was the dead captain’s daughter, Brophy called her and she put him in touch with Casey’s widow.

In addition to being devoted to his fellow veterans and his colleagues at ATF, Jan Casey said that her husband was an adventurous man. Together, the couple had logged more than 200,000 miles on their motorcycles, including a trip to Alaska. The Caseys also were avid volunteers: Every Thanksgiving and Christmas, they delivered holiday dinners to homebound seniors through the Meals on Wheels program.

Jan Casey laughed when she remembered one particularly challenging volunteer project: Her husband, who was not good with his hands, was supposed to teach developmentally disabled youngsters how to build birdhouses.

“I always said that Larry should never be allowed to hold a hammer and nails at the same time,” she said. “But the children built those birdhouses, and they’re still there.”