Frank Losonsky, considered the last of the surviving Flying Tigers from World War II, has died at age 99 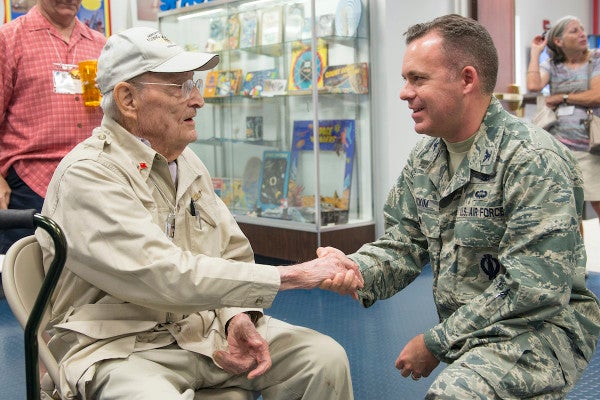 A Columbus man who was considered the last of the surviving Flying Tigers from World War II has died.

Frank Losonsky, 99, died Thursday at home from natural causes, his son Chris told the Ledger-Enquirer in a phone interview Monday. No funeral service is planned, he said.

According to a 2019 article on the Voice of America website, Losonsky was the last survivor of the Flying Tigers.

They were 311 U.S. military service members recruited to help the Chinese Air Force fend off the Japanese invasion in mid-1941, according to WarBirdNews.com. Losonsky became a crew chief and sergeant with the 3rd Squadron, nicknamed the Hell's Angels.

After the United States joined the war in December 1941, the AVG disbanded and became part of the U.S. Air Force 23rd Fighter Group in July 1942..

“It wasn't easy for Frank, who had to wend his way around the world, via South Africa, before he eventually found himself back in the States,” WarBirdNews.com reported. “He got married in the interim, and then returned to China as a mechanic with China National Aviation Corporation, a quasi-civilian airline which took part in the massive logistics operation flying supplies between India and China over the Himalayan Mountains during the period when Japanese forces had cut off the normal land route via the Burma Road. After the war he joined TransAsiatic Airlines in Burma, eventually becoming a pilot himself.”

In 2012, Losonsky was among the surviving Flying Tigers honored at the National Infantry Museum & Soldier Center in Columbus.

“He was kind of a hero,” said Chris, president of Part IV Inc., the restaurant group that owns the Speakeasy in Columbus. “We went to many, many of the reunions these individuals had over the years. It was always exciting being among those gentlemen. I kind of grew up with it, but everybody acknowledged him for his duty and his service.”

And it never got old for him.

“When he got around Flying Tigers stuff,” Chris said, “he lit up.”