At 10 years old, North Miami Beach K-9 police officer Radek has only a couple of more years patrolling and... 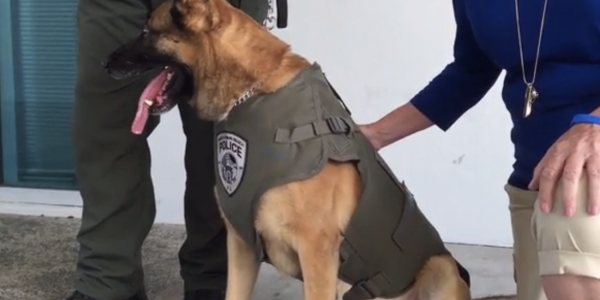 At 10 years old, North Miami Beach K-9 police officer Radek has only a couple of more years patrolling and sniffing for bombs before retiring to days of sticking his nose in places dogs like to sniff.

Radek’s got a better chance of making it to his golden years with his handler, North Miami Beach police officer Vincent Abbott, now that he’s one of the five NMB K-9 officers with new Kevlar Level 2 vests from Protect the Paws, an organization dedicated to vesting as many K-9 officers as they can. So far, that’s 1,600 nationwide and 82 in South Florida, according to Kendall’s Kathe Holmes, one of the organization’s founding quartet. (Protect the Paws partners with Associated Humane Societies of New Jersey, a non-profit.)

“Considering the cost of the dog and their training, it’s senseless to leave them unprotected,” NMB Police Chief William Hernandez said Tuesday as he announced the donation.

Holmes said the organization’s current fund-raising efforts are for the 11 Miami Beach police dogs. They’ve got enough for seven vests, each of which costs $724.

Protect the Paws was founded in 2011 after Holmes read an article about a young child who had asked friends and family to donate toward a bulletproof vest for a police K-9, in lieu of receiving a birthday gift.

To keep the dogs hydrated, the vests come with a pocket in which a cold pack could be inserted. North Miami Beach narcotics officer Eric Davis said it takes just two or three minutes to get the vest on his German Shepherd, Lex, who looked none too happy with his new protection. Then again, Lex got neutered recently.