A prosecutor said an AR-15 semi-automatic rifle, 10 magazines, 21 other firearms and "thousands of rounds of ammunition," were among items seized by investigators following the arrest of Lawrence, Massachusetts police officer Carlos Vieira on child rape charges this week 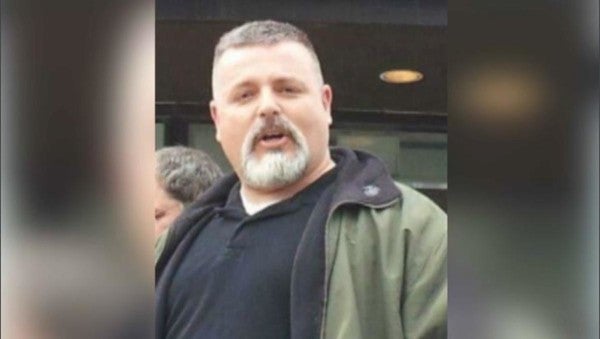 LAWRENCE — A prosecutor said an AR-15 semi-automatic rifle, 10 magazines, 21 other firearms and “thousands of rounds of ammunition,” were among items seized by investigators following the arrest of Lawrence, Massachusetts police officer Carlos Vieira on child rape charges this week.

But Gil Nason, Vieira's defense attorney, noted Vieira is a police officer, Marine Corps veteran and the AR-15 was issued to him through the Lawrence Police Department. He said there was nothing unlawful about the weapons or ammunition Vieira possessed. Nason also said he did not believe OxyContin but ibuprofen was confiscated by detectives.

Vieira, who is currently held without bail, is charged with two counts of aggravated rape of a child and two counts of indecent assault and battery on a person under age 14.

A boy, then age 13, told state police he had a sexual encounter with Vieira after making arrangements on the social media application GRINDR, according to court documents.

On Tuesday, Vieira, 49, was arraigned on the charges and Judge Lynn Rooney ordered the 19-year Lawrence police veteran held without bail until a dangerousness hearing scheduled for Friday.

At noon Wednesday, however, Rooney had the attorneys in the case return to court to discuss the law which allows judges to hold suspects without bail pending dangerousness hearings.

Rooney pointed to a recent ruling regarding that law and subsequently reversed her decision regarding Vieira being held without bail. However, Rooney suspended her decision for the next seven days which will allow prosecutors to file an appeal in the case. The dangerousness hearing scheduled for Friday was postponed.

Despite objections from Nason, Rooney did not set any bail for Vieira.

At this time he remains held in a jail in the western Massachusetts town of Greenfield, where he was taken after his arraignment Tuesday.

Normally defendants from this area are held at Middleton Jail. Nason said he did not know exactly why Vieira was taken to Greenfield but he believed it was for his own safety.

“I am sure there are people in Middleton he has had contact with,” said Nason, of Lowell.

Nason said he intended to file a motion in Salem Superior Court immediately and request a bail hearing at that higher court.

He repeatedly questioned how it could be legal to hold Vieira without bail after the judge reversed her decision.

Vieira is on paid administrative leave from the police department. If he is indicted in the case by the Essex County grand jury, his pay will be halted, said Police Chief Roy Vasque.

Nason said Vieira denies any involvement with the boy and was previously encouraged by the possibility of having bail sent on Wednesday in court.

“What he affirms is he has nothing to do with this,” Nason said.