At Least 33 US Troops Have Contracted Zika

At least 33 U.S. troops, including a pregnant woman, have tested positive for the Zika virus, U.S. military spokesmen said... 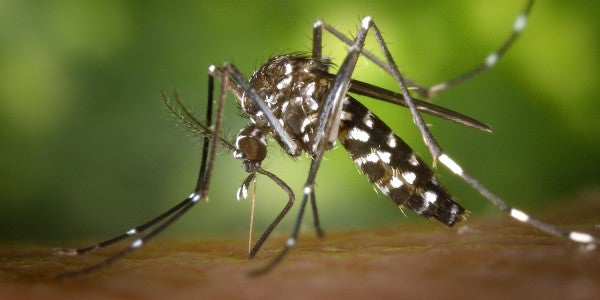 At least 33 U.S. troops, including a pregnant woman, have tested positive for the Zika virus, U.S. military spokesmen said Wednesday. Ten of those troops are men who answer to the Southern Command, the Pentagon subsidiary with oversight of troops in Latin America and the Caribbean.

Southcom spokesman Jose Ruiz said those 10 got infected in five locations — Brazil, Colombia, the Dominican Republic, Jamaica and Martinique. They serve in all five branches that answer to Southcom, he added, the Army, Navy, Air Force, Coast Guard and Marines.

The 10 “are all asymptomatic now,” said Ruiz, meaning they’re not currently sick. All were tested between February and July to make the list of confirmed cases. In addition, a woman relative of a U.S. service member working for Southcom got the infection in one of those five countries, he said. She is not pregnant and is asymptomatic, too, he said.

Southcom has liaison troops in four of the five nations. They generally work out of U.S. embassies on cooperation agreements such as military exercises or providing humanitarian relief. In the instance of Martinique, Ruiz said, a Coast Guard Cutter docked there as part of its anti-trafficking work with Southcom’s Joint Interagency Task Force and someone got sick.

One of the other 23 is a pregnant female service member, said Air Force Maj. Benjamin Sakrisson, a Pentagon spokesman. He declined to divulge where they are based or got sick. “At the moment it’s protected health information,” he said.

The Military Times first reported the figure of 33 on Monday.

Sakrisson added that the figure of 33 confirmed infected military members disclosed by the Pentagon on Wednesday was the tally as of last week, and was already counted in the global figure reported by the Centers for Disease Control and Prevention. A week earlier, the military had 27 confirmed cases, meaning the figures could have already risen by Wednesday’s disclosure.

Because Southcom personnel account for only 10 of the cases, the gap leaves at least two possibilities. Some service members may have contracted the virus while on leave or vacation in the Caribbean or South America, and returned to home bases with it. Other Florida-based troops who do not answer to Southcom could be among those infected.

Guantanamo spokesmen said no one was infected there.