Pentagon audits found widespread problems in enlistment bonuses given to soldiers in several National Guard units across the country, but... 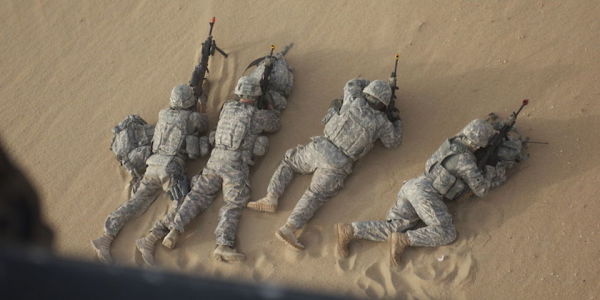 Pentagon audits found widespread problems in enlistment bonuses given to soldiers in several National Guard units across the country, but soldiers facing repayment demands in those states won’t be eligible for waivers under a new federal law that will apply only to the California National Guard.

The bonus mistakes appeared less common than in the scandal that has rocked the California Guard, although the Army Audit Agency looked only at a small sample of the bonuses and only at four states.

Agency audits obtained by the Los Angeles Times/Tribune Washington Bureau found “little or no oversight” of bonuses and other financial incentives given to soldiers in Indiana, Kentucky, Missouri and Pennsylvania from 2006 to 2010, the only states reviewed.

The audits said those Guard units paid “incentives to ineligible soldiers” and later — like the California Guard — sought to recover the money. The reports did not say how many soldiers were affected in the other states.

Related: Pentagon To Relieve Debt Of Most California National Guardsmen »

In October, following stories in the Times, the Pentagon suspended an aggressive effort to recover improper bonuses from about 9,700 California Guard soldiers and veterans. Congress last week passed a law that is expected to produce waivers for most of them.

But the provision, part of the $619 billion defense authorization bill that President Barack Obama is expected to sign, applies only to the California Guard. Soldiers and veterans from other states facing repayment demands are not covered.

Among those ordered to repay their bonuses are soldiers who did not complete their enlistments after they were injured in combat.

Dennis Lang, a former Army reservist from Columbia, Mo., said he received a letter from the Pentagon in March ordering him to repay $5,000 of a $20,000 enlistment bonus after he was discharged from the Army because of injuries he received in Iraq.

A civil affairs sergeant assigned to a small outpost in east Baghdad in 2007 and 2008, he was injured in a mortar attack. He was later diagnosed with severe post-traumatic stress disorder and memory loss due to his head injuries.

He says he first learned that he owed the Army $5,000 when he got a call from a debt collection agency last year, informing him that he was delinquent.

The Pentagon had turned the matter over to a private collection agency because Lang had not responded when it mailed a letter demanding repayment to an address he hadn’t lived in for more than a decade, he said.

The debt stemmed from his failure to attend training with his Missouri unit after he returned from Iraq. The Pentagon then demanded partial repayment of his bonus.

When he refused to pay, they began taking $300 out of his Social Security disability check every month.

“I think it’s just disgusting but I haven’t really been fighting it,” he said Wednesday in an interview.

While the California’s bonus fiasco has received the most attention, other states were also lax in ensuring that soldiers were eligible for the bonuses they got, according to the audits obtained by the Times.

None of the audits blamed fraud for the overpayments. In California, state and federal investigations focused on what prosecutors described as “massive fraud” although only one person who issued improper bonuses was sent to jail.

But the audits revealed other major problems.

In the Indiana National Guard, an audit of 130 enlistment bonuses awarded from 2006 to 2011, totaling $1.7 million, found that 45 percent were “improperly paid to soldiers that didn’t meet or maintain eligibility requirements” or were paid too much.

Since completion of the audit, an additional 1,132 cases where soldiers received improper bonuses have been found, according to Maj. Benjamin Tooley, a spokesman for the Indiana Guard.

Tooley said soldiers are facing repayment demands for several reasons, including failing the Army’s physical fitness test or drug and alcohol tests, or because they changed job assignments that invalidated the bonus.

He said soldiers could appeal, and that “no instances of criminal intent, to include fraud,” have been found.

In the Missouri National Guard, 30 percent of the enlistment bonuses and 70 percent of soldiers’ student loan repayments — another incentive used to attract recruits — “were made to ineligible soldiers or weren’t properly processed,” according to the Army audit.

The audit looked at only 61 payments, a tiny sample, however. It blamed the errors on relatively minor violations of rules, not on systemic problems.

One soldier didn’t have a “bonus control number,” a record keeping requirement, before he signed his contract, for example. Two others received their bonuses in lump sums, instead of installments, as required under the rules.

Nonetheless the audit recommended seeking repayment of the $45,237.22 paid to the soldiers. The Missouri Guard did not return calls seeking comment on the audit.

In the Pennsylvania National Guard, improper bonus payments were rare. All but four of 60 payments reviewed were “properly paid,” a 2011 audit found.

Because problems appeared less acute in other states, the National Guard Bureau, the Pentagon agency that oversees state Guard organizations, decided not to order a full audit of incentive payments around the country. It opted instead to tighten internal controls against fraud, officials said.

“We saw very early that there was no evidence of systemic, widespread fraud of the level that was found in California,” said Jack Harrison, a spokesman for the National Guard Bureau.

Lt. Gen. Timothy Kadavy, the director of the Army component in the National Guard Bureau told a House Armed Services Committee hearing last week on the California bonus scandal that reforms ordered since the audits, conducted between 2011 and 2013, had largely eliminated most improper bonuses.

“There are no issues outside of what we know to be normal” mistakes in paying bonuses, he said.

But even states that were not audited are continuing to find large numbers of improper bonus payments.

Texas is still trying to recover up to $4.6 million from 2,252 soldiers it believes violated their bonus contracts over the last decade, according to the Texas National Guard.