He Left The Battlefield In A Body Bag. Then He Woke Up.

In May 1968, John Bennett woke up in an unfamiliar place. A body bag. The Fairfield, Adams County, resident, then... 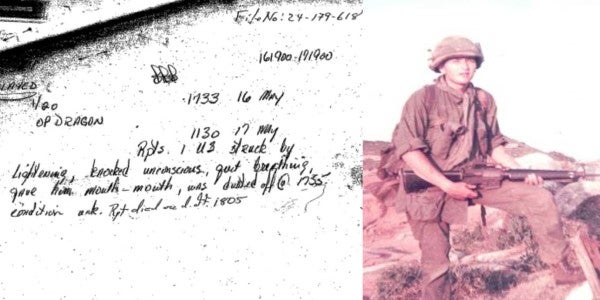 In May 1968, John Bennett woke up in an unfamiliar place.

The Fairfield, Adams County, resident, then an Army medic, had been struck by lightning while serving in Vietnam and was declared dead.

Phillip Kissinger, a Manchester Township resident who was a chaplain for Bennett's platoon, believes he wrote the letter Bennett's family received erroneously informing them of his death.

On Thursday, March 8, after nearly 50 years, the two got together at Kissinger's home in Manchester Township.

Bennett said he was struck by lightning that May day and was declared “killed in action.” His “body” was taken by helicopter to the morgue.

The then-20-year-old regained consciousness, and, using his knife, he cut himself out of the bag. He found himself among other body bags and stretchers, he said.

“What went through my mind is, 'How did this happen, and how did I miss this?'” Bennett recalled. Bennett said he was trained to keep an eye on everything during the war, but he didn't remember this.

In a state of confusion, Bennett remembered sitting there for a long time. He said it could have been 30 minutes before someone came in and found him confused among the bodies.

“They came from behind me, and I heard somebody say 'Whoa, what’s your problem son?'” Bennett said.

Bennett recalled telling the man “You tell me,” and the man returned with a body tag which said he was dead.

“Written on my body was 'Killed in action — struck by lightning,'” he said.

“Really I was in shock — literally,” Bennett said.

Bennett would later find that a death certificate had been issued.

In the chaos of the Vietnam War, Bennett's battalion was never notified that Bennett was, in fact, alive.

Now 70, Bennett said it was a few more days before he reunited with his battalion.

“Until I walked in, they had assumed that I had been killed and I was gone,” he said.

His battalion was preparing to name a bunker after their fallen comrade.

“I said, I guess you get out of building a bunker,” Bennett recalled.

When he finally did get back to his battalion, he rejoined the fight.

Kissinger, now 87, believes he wrote a letter to Bennett's parents informing them of his death, and both men believe Kissinger participated in Bennett's memorial service.

That letter reached his parents, but another letter correcting it was never sent out.

“My sister cried all night,” Bennett said of his family receiving the letter.

Bennett couldn't reach his family for weeks. He was eventually able to get a message to his father by radio.

By then, he said, “it was a month later, and they wondered why they didn't have a body.”

His wife, who was eight months' pregnant at the time, never received a letter about his death, Bennett said.

“I think there was that much confusion over there that no one knew where I was,” he said.

After the war, Bennett — whose nickname in high school was “Lightning” because of how fast he ran on track — became an electrician.

The coincidence wasn't lost on him.

“Of all things in the world to become — an electrician,” Bennett said.

Kissinger did not know what happened to Bennett until recently.

He said that the battalion was made up of four units, and he was at the headquarters while Bennett was on the front lines. Information sharing between the units was not always the best, he said.

“Hard telling what information went back, and if it did it never got back to me,” he said.

Additionally, he said he was re-assigned to a different battalion not long after Bennett's “death.”

Not long ago, a friend of Kissinger put him in contact with Bennett. It wasn't until late January that Kissinger found out about what had happened.

“I just called him last week, and I could not believe his whole story,” Kissinger said last month.

Bennett wrote a book about being struck by lightning in 2009, and Kissinger has been reading it.

Kissinger moved back to the York County area a few years ago after living in Idaho. He was a pastor for churches in Pennsylvania, Maryland, Tennessee and North Carolina. The York native now lives in Manchester Township with his wife, Gloria.

The two were supposed to reunite at the Round the Clock Diner on Feb. 7, but an ice storm that day delayed the meeting for more than a month.

On March 8, the two met at Kissinger's home before lunch. They wore their old uniforms.

Kissinger said he threw out all of his old records a few years ago, so he is uncertain if he was the one who sent the letter to Bennett's family. He also couldn't recall if they had interacted with each other much in Vietnam because Kissinger dealt with so many people.

“This is the first time in 50 years we've seen each other,” Kissinger said..

Bennett said he has more than 30 aneurysms in his brain, and that he could die any day. He said he's thrilled to still be alive.

“I live life to its fullest,” he said.

Living life to his fullest is just what he did while reconnecting with Kissinger.

The two noted how great it was to see one another. Bennett remarked about how good Kissinger looked for his age.

Bennett detailed his experience in his book “Killed in Action-Struck By Lightning: A Vietnam Combat Medic's Story” which was published in 2009.

— Reach Christopher Dornblaser at cdornblaser@yorkdispatch.com or on Twitter at @YDDornblaser.