Retired Lt. Col. Leo Gray, one of the original Tuskegee Airmen who fought in the skies over Europe during World... 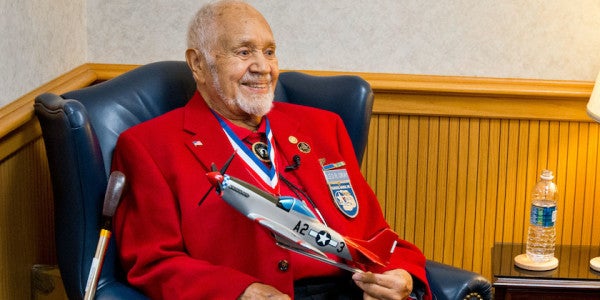 Retired Lt. Col. Leo Gray, one of the original Tuskegee Airmen who fought in the skies over Europe during World War II, died Friday in his Coconut Creek home. He was 92.

Gray, a Boston native, enlisted after high school — when the U.S. military was segregated — and began training in 1942 at Tuskegee Army Airfield. He became an active-duty pilot the following year.

He was then stationed in Italy, where he flew 15 combat missions as a pilot with the 100th Fighter Squadron, 332nd Fighter Group, which protected Allied bombers. He flew the P-51 Mustang, also referred to as a “Red Tail,” logging 750 flight hours.

“He said he never got a chance to shoot down any Germans, but he was ready to,” said Gray's friend, Maj. Nate Osgood of the Broward Sheriff's Office. “[The Tuskegee Airmen] were true pioneers of the civil rights movement.”

In 2013, the Broward Sheriff's Office recognized Gray, along with Col. Eldridge Williams and Judge Richard Rutledge, for serving their country while battling racism and bigotry.

After the war, Gray earned his bachelor's and master's degrees in agricultural economics and became an executive with the U.S. Department of Agriculture until his retirement in 1984.

Gray played a leading role in the Tuskegee Airmen Inc. organization, which provides scholarships to minorities studying aviation and aerospace. He served as president of the Miami and East Coast chapters.

“I'm very proud of him and what he's accomplished,” said his son, Roger Gray, who served in the Navy and in the Air Force reserves.

Gray's youngest daughter, Kathryn Bryant, has fond memories of many summer road trips the family would take when Gray had to travel for work.

“He was an awesome dad. He was our hero, and not everyone can say that about their dad,” she said. “He was very supportive. He was proud of his children.”