‘Those Were Lies, Plain And Simple’: Comey Says On Trump In Emotional Opening Statement

James Comey, the former FBI director, delivered a blistering, emotional opening statement before the Senate Intelligence Committee during his blockbuster... 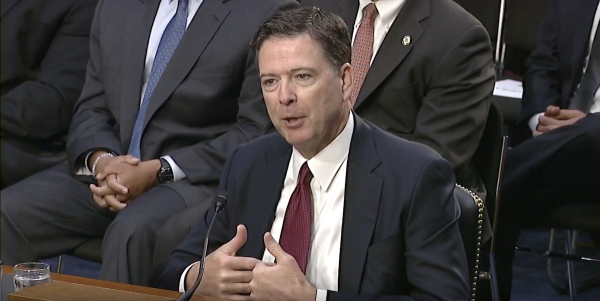 Comey, fired by Trump in early May, said the administration tried to “defame” him and the FBI by spreading “lies, plain and simple,” after his departure.

The ousted FBI director bypassed reading the opening testimony that he authorized to be released Wednesday, instead opting to deliver a different brief, punching statement.

“I understood that I could be fired by a president for any reason or for no reason at all,” he said. “And on May the ninth, when I learned that I had been fired, I immediately came home as a private citizen. But then the explanations, the shifting explanations, confused me and increasingly concerned me.”

The Trump administration initially pointed to Comey's handling of the investigation into Democratic presidential nominee Hillary Clinton's use of a private email server as the reason for his dismissal. But Trump later said in an interview with NBC News' Lester Holt that Comey was fired with the Russia investigation on his mind. When he was fired, Comey was overseeing the bureau's investigation into whether the Trump campaign colluded with Russian officials to meddle in the 2016 presidential election.

That latter point referred to a New York Times report saying Trump told Russian diplomats in an Oval Office meeting that Comey was a “nut job” and that his firing eased the pressure of the Russia investigation.

“I was also confused by the initial explanation that was offered publicly that I was fired because of the decisions I had made during the election year,” he said. “That didn't make sense to me for a whole bunch of reasons, including the time and all the water that had gone under the bridge since those decisions had to be made. That didn't make any sense to me.

“And although the law required no reason at all to fire an FBI director, the administration then chose to defame me, and more importantly the FBI, by saying that the organization was in disarray, that it was poorly led, that the workforce had lost confidence in its leader,” he continued. “Those were lies, plain and simple. And I am so sorry that the FBI workforce had to hear them and that the American people were told them.”

Comey said the FBI would “be fine without me” after saying he “worked every day at the FBI to help make that great organization better.”

“The FBI's mission will be relentlessly pursued by its people, and that mission is to protect the American people and uphold the Constitution of the United States,” he said. “I will miss being a part of that mission, but this organization and its mission will go on long beyond me and any particular administration.”

He concluded his statement by offering a message to the American people and his former colleagues.

“I want the American people to know this truth: The FBI is honest, the FBI is strong, and the FBI is an always will be independent,” he said. “And now to my former colleagues if I may: I am so sorry that I didn't get the chance to say goodbye to you properly. It was the honor of my life to serve beside you, to be part of the FBI family, and I will miss it for the rest of my life. Thank you for standing watch, thank you for doing so much good for this country, do that good as long as ever you can.”