"When I see you, I see the fear in your eyes because of how the media portrays us all to be." 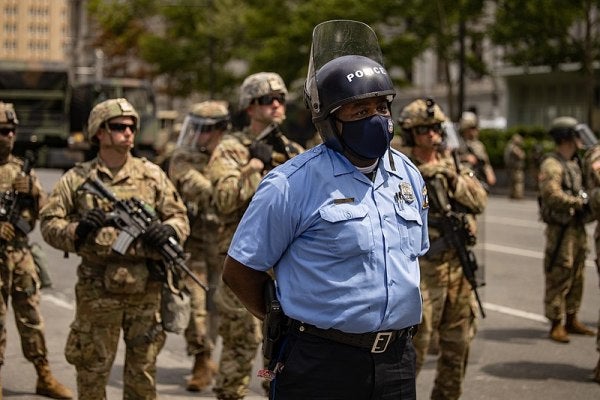 Being a Black man, who do you see when you see me? Many of you see a man who may rob you. Give me a chance to be seen as me. Some see a strong Black man with muscles and size. Inside, you wonder, is he an athlete or did he get those muscles from push-ups when he was in jail? When I see you, I see the fear in your eyes because of how the media portrays us all to be. I drive a nice car and wear nice clothes, so I have to be an athlete or a drug dealer. Is that fair? No.

If it was, I would see all whites as sheet-wearing, fire-carrying people who want to harm me and everything that I stand for. We all know what happens when we assume things in life.

Being a Black man in America, I'm judged before a crime has been committed. I've been convicted and condemned without my knowledge. The crime is being a Black man. I had no choice. When people look at me, they wonder how many different women I have slept with and made babies out of wedlock.

I grew up in Georgia. I was raised by a single mom with four kids. My mother got divorced around the age of 28. All she could do was give us her love and raise us the best way she knew how. As a young boy, I had no clue of what discrimination was. All I knew was my neighborhoods were Black and that white people lived on the other side of town.

When I was 14, I liked this girl, and she happened to be white. One weekend I called her house. A woman answered the phone, “Hello.” I asked to speak to my friend. The woman responded, “Is this Jarvis?” I replied, “Yes, ma'am.” She said, “Do me a favor, I know you are a (racial slur) so don't ever call my house again.” I hung up the phone and forever had my life changed. I just tucked it away and moved on.

Over the years, I've allowed myself to welcome diversity with open arms. I appreciate and cherish that portion of my life.

At the age of 17, I joined the U.S. Navy. I felt that was my way out into the world. For the first time, my life wasn't a black and white TV. I saw the world with a new vision. Over the years, I've allowed myself to welcome diversity with open arms. I appreciate and cherish that portion of my life.

For more perspectives from law enforcement:

It's tough being a Black man and a Black father in America. I worked multiple jobs to do what I needed to do. I raised my kids after I divorced their mom. Not one time did I ever falter on any of my parental responsibilities. They were Black kids in America, I knew and carried their burden for them. They had no idea what it meant to be Black in America until they had their own experiences. My job was to make sure their lives were better than my life.

After the military, I decided to become a police officer. More importantly, I am a Black police officer and a Black man. I had the audacity to put a badge on my chest, when it makes people feel so uncomfortable. The struggle of I'm too Black to be blue, but too blue to be Black.

Being Black in America is tough.

Thanks to protests from the courageous Blacks in history who had enough and pushed back on the system, we have achieved the things we have as of today.

No matter where I go in this country, I'll never truly be free.

How did we get to this moment? I'll say this for the first time, I actually feel hopeful we may be able to have change for the better. It feels way different than before. People are being heard and others are ready to listen. We have to change the mentality of our culture.

When you see me, who do you see? You see me in and out of my uniform. I stand here humbled, angry, frustrated, and yet I'm still thankful for having a voice “to speak up and speak out.” No matter where I go in this country, I'll never truly be free. “A golden cage is still a cage.” As a Black man in America, I feel just as naked as my ancestors did when they stood in shackles on the auction block over 400 years ago.

Gresham is a detective with San Diego Unified School District's Police Department. He's worked with several law enforcement agencies over the past 24 years in various roles. He currently serves as president of the San Diego Schools Police Officers' Association.