Which Parts Of The US Are Likeliest To Be Vaporized In A Russian Nuclear Attack?

Since the Cold War, the US and Russia have drawn up plans on how to best wage nuclear war against... 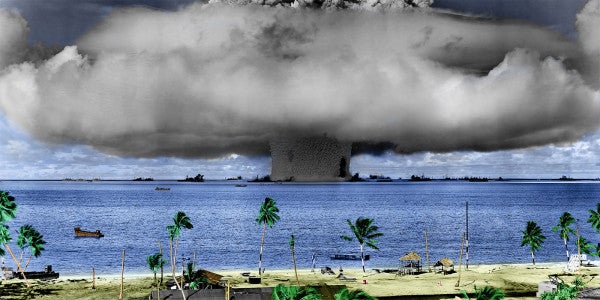 Since the Cold War, the US and Russia have drawn up plans on how to best wage nuclear war against each other — but while large population centers with huge cultural impact may seem like obvious choices, a smarter nuclear attack would focus on countering the enemy's nuclear forces.

So while people in New York City or Los Angeles may see themselves as being in the center of the world, in terms of nuclear-target priorities, they're not as important as places in states like North Dakota or Montana.

This map shows the essential points Russia would have to attack to wipe out the US's nuclear forces, according to Schwartz:

This map represents targets for an all-out attack on the US's fixed nuclear infrastructure, weapons, and command and control centers — but even a massive strike like this wouldn't guarantee anything.

“It's exceedingly unlikely that such an attack would be fully successful,” Schwartz told Business Insider. “There's an enormous amount of variables in pulling off an attack like this flawlessly, and it would have to be flawless. If even a handful of weapons escape, the stuff you missed will be coming back at you.”

Even if every single US intercontinental ballistic missile silo, stockpiled nuclear weapon, and nuclear-capable bomber were flattened, US nuclear submarines could — and would — retaliate.

According to Schwartz, at any given time, the US has four to five nuclear-armed submarines “on hard alert, in their patrol areas, awaiting orders for launch.” Even high-ranking officials in the US military don't know where the silent submarines are, and there's no way Russia could chase them all down before they fired back, which Schwartz said could be done in as little as five to 15 minutes.

But even a strike on a relatively sparsely populated area could lead to death and destruction across the US, depending on how the wind blew. That's because of fallout.

The US has strategically positioned the bulk of its nuclear forces, which double as nuclear targets, far from population centers. But if you happen to live next to an ICBM silo, fear not.

There's a “0.0 percent chance” that Russia could hope to survive an act of nuclear aggression against the US, according to Schwartz.

So while we all live under a nuclear “sword of Damocles,” Schwartz said, people in big cities like New York and Los Angeles most likely shouldn't worry about being struck by a nuclear weapon.