She was young and could not speak English, but the Iraqi-born girl could tell the Marines from the others. “It... 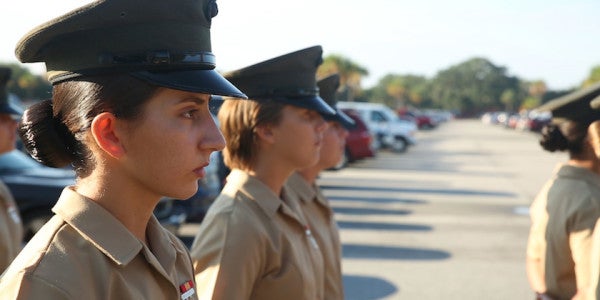 She was young and could not speak English, but the Iraqi-born girl could tell the Marines from the others.

“It was mostly the Army in Mosul, but Marines were different,” said Marine Corps Lance Cpl. Amanda Issa, 21, who was 8 years old during the invasion of Iraq in 2003.

U.S. troops held the city early in the war as the insurgency flashed across the country, including the battle for Mosul in 2004, which left four U.S. troops dead, more than 70 insurgents killed and a city crippled by roadside bombs and daily gun battles.

The Marines there stood differently from soldiers, Issa said during an interview with Stars and Stripes. They carried themselves in a special way. One Marine from her childhood stood out when he offered her a mint chocolate bar.

Somehow, she decided right then, she was going to be a Marine.

Years later, after war forced her family to flee to a refugee camp and later to the United States, she would get her chance. And she could end up deployed near her embattled hometown.

Mosul, the largest city in northern Iraq, is the closest hub to Syria, where the Islamic State group funneled fighters to establish its caliphate in 2014. It is now the center of a highly anticipated offensive launched early Monday. U.S. troops are serving to advise and assist Iraqi forces in their mission to dislodge Islamic State fighters entrenched there.

Nearly 5,000 U.S. troops, including Marines, are in the country. Lt. Gen. Stephen Townsend, the top commander of the effort in Iraq and Syria, said Monday that Western coalition efforts include “air support, artillery, intelligence, advisors and forward air controllers.”

The city was unstable in 2010, Issa said, when sectarian tensions were heightened and U.S. troops left major cities ahead of the eventual withdrawal. It was especially difficult for Christians like Issa.

“We couldn’t go to school or work, or get basic needs,” she said. “My sister couldn’t go to college. It was hard to stay there and be safe. There was no safe option.”

Her family left Mosul for a refugee camp in Turkey and stayed for nearly a year. They moved to Michigan in 2011 to join family members. Issa, who had gone from a war zone to a refugee camp in less than 12 months, experienced layers of culture shock in Detroit.

“It was hard for us to communicate. Everything was different,” she said. “It was hard, but you learn how to adapt. You have to accept the change.”

The difficulty didn’t faze the 11th-grader as she pushed through English classes to catch up. She graduated among the top 10 students of her class of about 500, and later earned an associate’s degree in global studies at Oakland Community College in Bloomfield Hills, Mich.

But being a Marine was still on her mind.

“It was always there. I knew this was the change I wanted,” she said. “After I got here (to the United States), I said: ‘This is the time for it now.’”

Issa entered boot camp at Marine Corps Recruit Depot Parris Island, S.C., in January, and became one of an unknown number of Iraqi nationals who serve in the U.S. military. A Pentagon official said the Defense Department does not track how many refugees from any country join the service, speculating that few enlist given the relatively low population.

Early in her training, Issa broke her wrist, which nearly sealed her medical separation from the service. But with encouragement from her drill instructor, Issa healed and joined another platoon. She graduated Sept. 30. Before becoming an official Marine, she became an American. Issa was naturalized as a citizen the day before graduation.

The grim news from her hometown mostly escaped her while she was in training. One million people are expected to flee the city during the Mosul offensive, which could spark the worst humanitarian crisis in recent times, according to the United Nations.

Issa reported to Camp Geiger in North Carolina on Monday, hours after Iraqi troops and Kurdish militia launched the offensive in Mosul. She will conduct Marine combat training and then pursue training as a traffic management specialist.

“Right now I’m trying to focus on … all the training the Marine Corps can give me,” she said.

Issa’s ability to speak Arabic earned her a language proficiency mark on her service record. If the Marine Corps needs those skills, she will be ready to use them immediately, said Sgt. J.R. Heins, a spokesman for the Marine Corps recruiting station in Detroit.

That could happen in Iraq, even near her hometown.

She might teach her fellow Marines the original name of places there if she were to deploy. U.S. troops on deployment typically rename native roads, buildings and objectives to Americanize foreign words to make them easier to pronounce.

Qayyarah Airfield West, near Mosul, is commonly referred to as Q-West or Key West by troops and is a key artillery detachment for the offensive. The main highway linking Baghdad, Mosul and Syria, which pumped Islamic State fighters into the country, was renamed Route Tampa.

For Issa, it’s a broad avenue she traveled often as a child. It’s Highway 1 to her. And it’s possible she could be back there at some point, with a rifle in hand and an eagle, globe and anchor symbol on her body armor.

“I want to give it my best, whatever job I’m doing,” she said. “Wherever the Marine Corps needs to send me, I’ll go. It doesn’t matter if it’s Mosul or any other country.”