Why Locals Bought A Navy Destroyer 920 Slices Of Pizza

City residents Glenn Hamler, Reid Burdick and Jason Burdick made a special delivery Monday to the sailors aboard the USS... 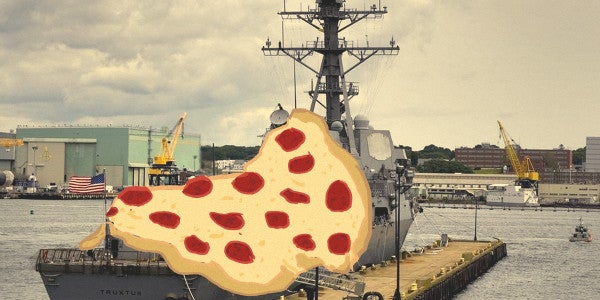 City residents Glenn Hamler, Reid Burdick and Jason Burdick made a special delivery Monday to the sailors aboard the USS Truxtun, a Navy destroyer docked at Fort Trumbull for the duration of Tropical Storm Hermine.

The New London guys loaded 920 pieces of pizza into the back of Reid Burdick's pickup truck and brought it to the pier, where they were met by armed security officers who had been forewarned that dinner was on its way.

“They got a whole bunch of Navy personnel that came out and brought it to the ship like it was a pizza parade,” Burdick said in a phone interview Monday evening. “They seemed very gracious and very appreciative.”

Burdick said Hamler, a longtime friend, called him up Sunday with the idea of buying pizza for the sailors, who, Burdick noted, are not on a port call and remain on active duty. Burdick said he and Hamler agreed to pay for the pizza. He said he negotiated a price with Empire Pizza on Broad Street for 35 party sheets of pizza and that they were able to defray the cost with donations from the New London Rotary Club and VFW.

Burdick said he, his son and Hamler were thrilled when, after emptying Burdick's pickup, they were allowed to tour parts of the ship. Bringing them pizza, he said, had just seemed like a nice thing to do.

“These guys duck into New London,” he said. “They're serving our country. They're keeping us safe.”

The USS Truxtun, which is not open to the public, will remain at Fort Trumbull until the storm has passed.