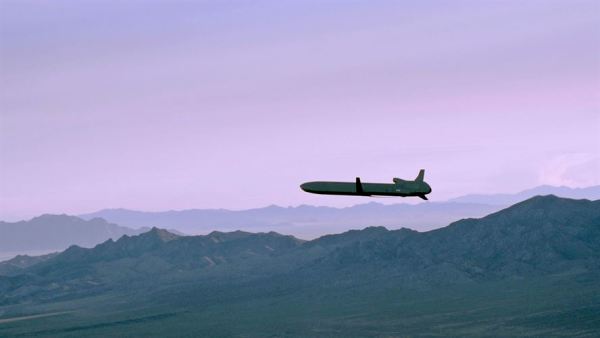 The defense contractors were awarded agreements valued at $900 million apiece and lasting almost five years “to mature design concepts and prove developmental technologies,” the Air Force said in a release on Wednesday.

“This weapon will modernize the air-based leg of the nuclear triad,” Air Force Secretary Heather Wilson said. in a statement. “Deterrence works if our adversaries know that we can hold at risk things they value. This weapon will enhance our ability to do so, and we must modernize it cost-effectively.”

LRSO is a nuclear-capable cruise missile to be launched from aircraft such as the B-52 Stratofortress, B-2 Spirit and future B-21 Long-Range Strike Bomber. The B-1B Lancer, because it is no longer a nuclear-capable bomber, is not slated to receive the weapon, Air Force officials told Military.com.

The LRSO program would replace the AGM-86B Air Launched Cruise Missile, known as ALCM, developed in the early 1980s. The Air Force plans to start fielding LRSO in the late 2020s, the release said.

Both companies will do preliminary work until the Air Force Nuclear Weapons Center will choose a sole company to design and manufacture LRSO in 2022.

Lockheed will perform work at its Orlando, Florida, facility while Raytheon will use in Tucson, Arizona, as its facility, the release said.

Air Force officials on background said that unlike GBSD, information on LRSO — like the highly-classified B-21 stealth bomber — is scarce because of its upped classification. The only commonality between GBSD and LRSO “are that they are nuclear,” but LRSO remains a more tactical program. Officials explained the LRSO missile is a weapon in it of itself — and does not divulge tactics, techniques or procedures — instead of an entire launch and command-and-control system like GBSD.

Classification of the program was determined by the “appropriate classifying authority,” officials said, and noted that appropriate leadership — such as lawmakers — are briefed accordingly on a need-to-know level as the program progresses.

Furthermore, defense companies have not openly disclosed if they bid on the program. The Air Force launched the contract request for proposal last year.

In March, Rep. William “Mac” Thornberry, a Republican from Texas and chairman of the House Armed Services Committee, said he “would be willing to support” speeding up the fielding of LRSO, or the B61-12 nuclear bomb on the F-35 Joint Strike Fighter because of continuous arms treaty violations from Russia.

The congressman’s comments came the same day as nine Senate Democrats said they wanted to cap funding on the LRSO program in an effort to slow its development.

Sen. Ed Markey, a Democrat from Massachusetts and a member of the Senate Foreign Relations Committee, and eight senators introduced the bill, which would limit funding for a new nuclear-armed air-launched missile “at 2017 levels until the Trump administration submits a Nuclear Posture Review to Congress,” according to a press release.

A similar bill was introduced by House members in May. Neither bill has made it to committee.

Air Force officials reiterated the need for LRSO, and not just because of ALCM’s age. With adversaries technological advances, ALCM will no longer be able to penetrate various systems, they said.

LRSO will only be able to be carried on bomber aircraft. It will not be interchangeable with the B61-12 nuclear bomb, for example, on the F-35 Lightning II.