Sgt. Tyrone Hassel III, 23, was fatally shot on New Year's Eve. Prosecutors believe his murder was perpetrated his wife and her boyfriend; all three were active-duty soldiers at Fort Stewart, Georgia 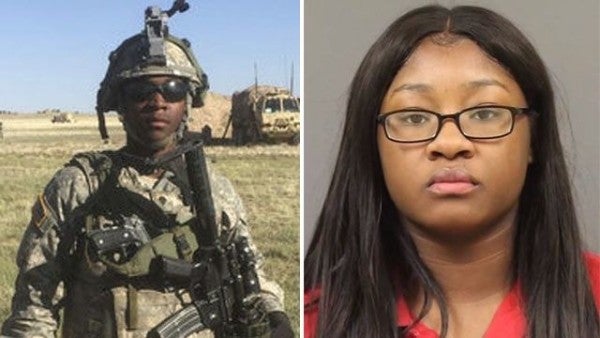 Authorities in West Michigan have announced murder charges in the suspected love-triangle killing of an Army soldier.

His wife, Kemia Hassel, 22, was arraigned Monday on a charge of first-degree premeditated murder while her boyfriend is in jail in Georgia awaiting extradition to Michigan to face the same charge, Berrien County Prosecutor Michael Sepic said. Both suspects are active duty soldiers.

“The motive for the two to plot Sgt. Hassel's death may have been to continue their relationship and reap the Army's death benefit from his murder,” Sepic said.

The Hassels, who were stationed at Fort Stewart, Georgia, were staying with their 1-year-old child at Tyrone Hassel III's father's house Colfax Avenue over the holidays during their leave. Sepic said the sergeant was killed after bringing his wife some food from a family party.

Sepic said authorities believe Kemia Hassel's boyfriend, Jeremy Cuellar, 24, who is also stationed at Fort Stewart, traveled to Chicago several days before the killing and then waited for instructions from his girlfriend before ambushing the victim.

The investigation included both local law enforcement and Army investigators.

Kemia Hassel was given a $2.5 million bond at her arraignment. A pre-exam conference has been scheduled for Jan. 23, and a preliminary exam for Jan. 29. She has asked for a court-appointed attorney.

Cuellar, too, has been charged with first-degree premeditated murder. He is also facing a felony firearms charge.

The case brings to mind the conviction of a woman in the death of her soldier husband decades ago in Detroit.

Toni Cato Riggs and her brother, Michael Cato, were charged and convicted of killing Riggs' husband, Army specialist and Persian Gulf War veteran Anthony Riggs, in 1991. Authorities said the killing was part of a scheme engineered by Riggs to turn her failed marriage into an hefty insurance payout.

SEE ALSO: The Teenage Love Triangle That Sent The Texas 'Cadet Killers' To Prison 20 Years Ago