Lt. Col. Kate Germano On The Problem With Gender Bias In The Marine Corps

Marine Lt. Col. Kate Germano, who was relieved of command at Parris Island in June, explains the problem of gender... 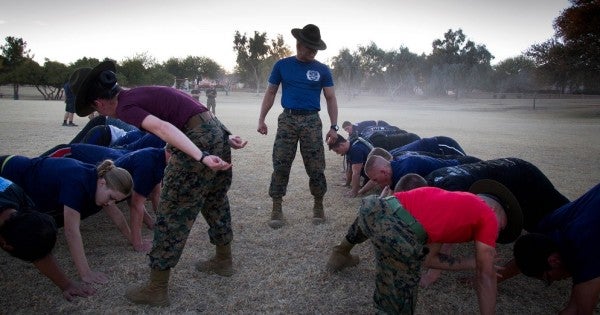 Marine Lt. Col. Kate Germano, who was relieved of command at Parris Island in June, explains the problem of gender segregation in the Marine Corps and the cultural divides it creates in the treatment and expectations of female Marines.

In her article, which was originally intended to be published in the Marine Corps Gazette but pulled after she was relieved, Germano argues that double standards established from the beginning of female Marines’ careers in the delayed entry program follow them to boot camp and lead to lower expectations and performance among female Marines, and across the service.

“If females are held to lower standards for performance from the day they join the DEP, it stands to reason that they will continue to underperform at recruit training when surrounded only by other females. Because they aren’t challenged to compete with their male counterparts during physical fitness events, most only aspire to achieve female standards for physical performance, which many would justifiably argue are too low to begin with. The truth is that when female recruits are held to higher standards, they rise to the occasion.”

Germano’s firing has led to a controversy over whether or not she was being punished for what the Corps called an abusive leadership style.