The U.S. Army has revealed its newest tank 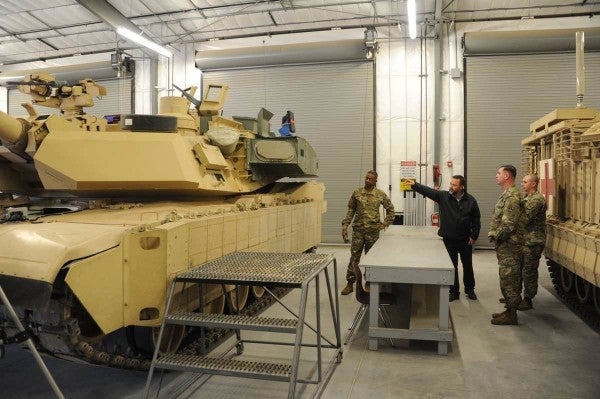 The U.S. Army has revealed its newest tank.

The new M1A2C Abrams boasts new active and passive protection that could help to protect it from the latest enemy weaponry.

The photo depicts one of the new fighting vehicles at the Army's Yuma Proving Ground in Arizona. The most obvious new features of the M1A2C that are evident in the photo are the vehicle's Trophy active protection systems and an additional slab of armor on the front of its turret.

Trophy uses a radar to detect incoming missiles and rockets then fires tiny projectiles to intercept the munitions. The Army also is back-fitting Trophy to some older M1 models.

The M1A2C is the latest variant of Abrams to enter production. Congress gave the Army $1.5 billion to buy 135 M-1s from General Dynamics in 2019, extending a program that began in the 1970s.

A major upgrade in 1986 added a new 120-millimeter gun. This is the M1A1. The Army and Marines bought 5,200 copies through 1992. Roughly a thousand M1A1s still are in service with the Marines and Army National Guard. Another 3,000 or so are in storage.

There are a bewildering number of subvariants of the M1A1, each boasting incremental improvements in drive-train, armor and electronics. The latest upgrade, the M1A1SA, has a factory-fresh engine, digital electronics and a top-secret armor blend that includes a thin layer of uranium.

The M1A2 appeared in 1992. It's pretty much a new tank, with better armor than the basic M1A1 plus a new internal layout and fresh sensors that together allow the gunner and the commander independently to search for targets.

The Army has acquired around 1,500 M1A2s and converted most of them to the System Enhancement Package Version 2 standard. The M1A2SEPv.2, which General Dynamics describes as a “digital tank,” features high-end computers, a remotely-operated machine gun on the turret and a dozen batteries that allow the tank quietly to operate its sensors without turning on its engine.

The M1A2C in essence is a better-protected M1A2SEPv.2 that's also easier to upgrade. In addition to Trophy and more armor, the new tank boasts more electrical power, better diagnostic systems and a data-link that's compatible with programmable ammunition types that are in development.

“The Abrams M1A2C can host any mature technology the Army deems operationally relevant,” the Army stated.

The latest version of the M1 arguably is the best tank in the world. For now.

Russia and China both are developing new fighting vehicles. Russia's high-tech Armata tank has run into development problems, but China successfully has fielded hundreds of new Type 99A tanks that roughly are similar to mid-generation, digital M-1s.

But China has struggled to adapt old-style doctrine to its new armor. In early 2019, the Chinese army's 81st Group Army, riding in Type 99As, lost a mock battle during a war game in Mongolia, Global Times reported, citing the state-run CCTV television news network.

“We rushed with the Type 99A too close to the frontline, which did not optimize the use of the tank's combat capability,” CCTV quoted Xu Chengbiao, a battalion commander in the brigade, as saying.

“We only studied the capabilities of older tanks, but have not completely understood new ones,” Zhao Jianxin, another battalion commander, reportedly told CCTV.

Anticipating the day when Russia resumes modernizing its tank corps and China figures out how to use its own new fighting vehicles, the U.S. Army already is planning a new M1 variant to follow the M1A2C.

The “cornerstone technology” of the M1A2D is a new infrared sensor, according to the Army. The newest Abrams will also sport a new laser range-finder and will be compatible with artificial intelligence that could make the tank more autonomous, the Army stated.

SEE ALSO: The Army's M1 Abrams Tanks Are Officially Getting A Major Upgrade