The Dale Mabry gate at MacDill Air Force Base in Tampa will continue to have 24-hour access, but all other... 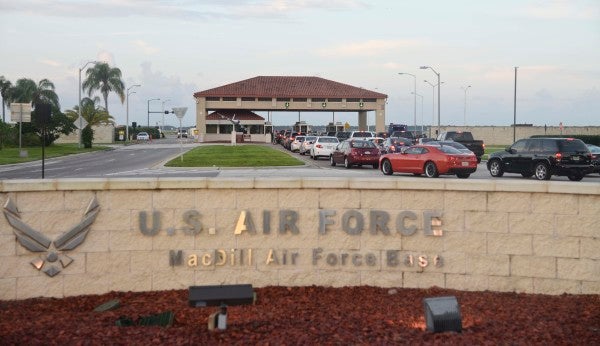 The Dale Mabry gate at MacDill Air Force Base in Tampa will continue to have 24-hour access, but all other gates will be closed as part of the base’s updated response to increasing cases of COVID-19 in the area.

Hillsborough County reported a single-day high in positive cases on Wednesday of 716 new infections. According to the base’s Facebook page, there has been an increase of cases on base, as well, but “due to operational security, we don’t release specific numbers for the base,” according to a MacDill spokesman.

Base leaders, including acting commander of the 6th Air Refueling Wing, Col. Benjamin Robins, advise those on base to adhere to Centers for Disease Control guidelines, including hand-washing and exercising social distancing.

“Some of the cases that we are seeing may have been prevented using the CDC guidelines,” Robins said in a video message. “Infecting others not only endangers them personally, but also hampers our mission.”

For those picking up prescriptions, off-base prescriptions will be processed at the drive-through pharmacy on base, and “prescription services at the Main Clinic and Sabal Park pharmacies will be limited to empaneled patients with appointments and specialty referral prescriptions,” according to a release.

The Army & Air Force Exchange and commissary hours remain the same, but base access is encouraged only for essential trips.

“We very much understand the desire to return to normal, but now is not that time,” Robins said.

As of June 19, Florida remains one of four states under the Department of Defense’s military travel restrictions for failing to meet criteria such as 14-day downward trajectory of new COVID-19 cases or positive tests. That limits travel of active-duty service members into and out of the state.