The 7.62mm High-Capacity Drum Magazine You Never Knew You Needed Is Finally Here 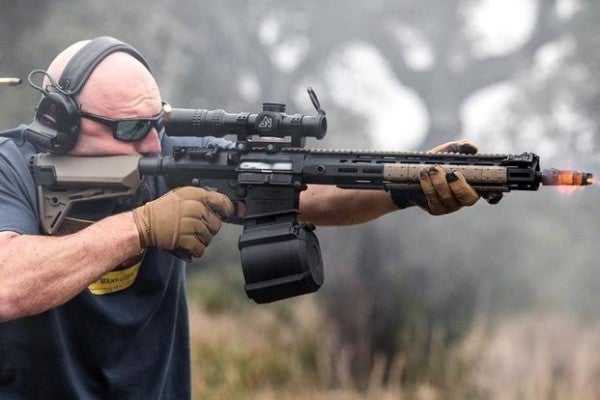 The D-50 features “proven GEN M3 technology, which includes next-generation impact and crush-resistant polymer construction and the ability to seat fully loaded on a closed bolt,” according to Magpul's website.

The robust stainless-steel internal components are designed to withstand corrosion and long-term storage while loaded with no loss of function, spring fatigue, or reliability concerns.

The D-50 weighs about 1.7 pounds empty and 4.5 pounds loaded, making it “one of the lightest 50-round 7.62mm drums available, the website states.

And the D-50's “unique drum configuration gives it roughly the same overall height profile as a standard 25-round 7.62mm PMAG, making storage easy and shooting from various positions — including prone — no different than with smaller capacity magazines,” the website states.

A special, ratcheting loading lever removes spring tension so the D-50 can be easily loaded by hand, the website states. The D-50 features an anti-glare translucent window on the rear of the drum for quick positive visual indication of remaining ammunition.

It can be disassembled quickly with a simple flat blade screwdriver or similar tool, and it comes with a dot-matrix pattern that allows for easy marking and identification, the website states.

The D-50 retails for about $150 and is “coming soon,” according to Magpul's website. It comes with a slip-on, semi-rigid dust cover to prevent grit and debris intrusion during storage and transport.

SEE ALSO: The Company Behind Your Favorite Firearm Accessories Make A Pretty Slick Wallet, Too