A Japanese man received a “stern warning” from police after dressing up in an all-black outfit and holding what appeared... 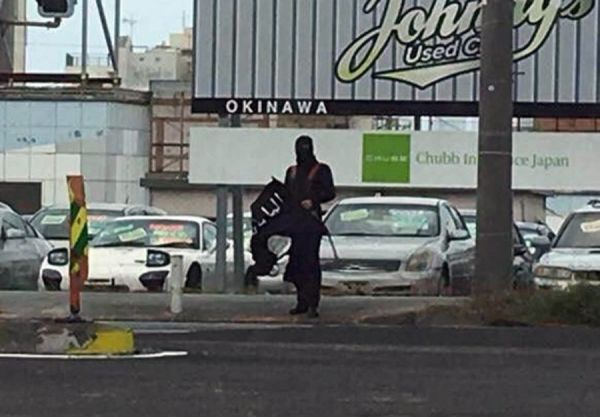 A Japanese man received a “stern warning” from police after dressing up in an all-black outfit and holding what appeared to be an Islamic State banner outside Kadena Air Base over the weekend.

Okinawa police said they were called to the scene on Sunday by Kadena officials after the man, who was wearing a black jumpsuit and mask, was spotted with the banner near Gate 1.

The man was asked to leave the area after receiving a “stern warning that his actions could lead to trouble,” police said. He left without incident.

Okinawa police would not identify the man and declined to offer further details. Kadena officials did not respond to a request for comment on Tuesday.

Okinawa’s Sankei newspaper reported Monday that the man is a frequent anti-U.S. base protester with no ties to the Islamic State who donned the attire as a Halloween prank. The flag reportedly said, “We love President Trump.”

Donald Trump is scheduled to visit the Tokyo area Nov. 5-7 for his first visit to Japan as commander in chief.