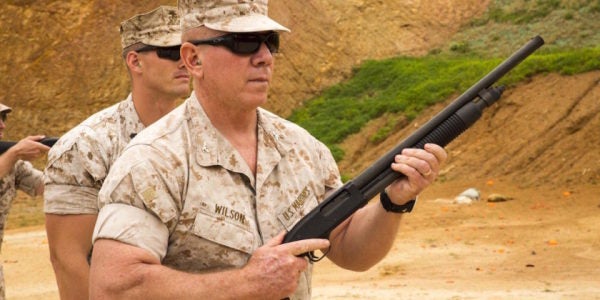 But months before that crime was committed, Wilson had been rapidly removed from a key leadership posting in Darwin, Australia after just ten days amid reports of drunken misbehavior and inappropriate comments.

A report from the Inspector General of the Marine Corps, newly obtained by Military.com, faults the commanding general of III Marine Expeditionary Force in the Pacific, Lt. Gen. Larry Nicholson, for neglecting to investigate Wilson's actions in Australia more thoroughly, substantiating that he failed to report the officer's misconduct to senior Marine Corps leadership and the military justice branch.

It's a finding likely to have profound career implications for one of the service's most combat-seasoned and widely admired generals.

In a statement to Military.com, Nicholson acknowledged the findings of the oversight agency and owned his role in the Australia proceedings.

“Upon learning of this officer's actions in Australia, he was fired and promptly recalled to Okinawa,” he said. “I accept responsibility for not taking follow-on administrative actions, and for not placing this officer on the Officer Disciplinary Notebook.”

Wilson's brief and ill-favored tenure in Australian might never had been made public if not for his later crimes. His general court-martial aboard Camp Lejeune in September featured prosecution witnesses who had served with him in Darwin and testified to a range of boorish behavior charged as conduct unbecoming an officer and a gentleman.

Assigned as a liaison officer for Marine Rotational Force-Darwin for a six-month posting, Wilson managed in the space of days to offend both American and Australian colleagues, often in the context of heavy drinking.

According to court testimony, Wilson told the wife of the outgoing Darwin liaison, another colonel, that he bet her “thighs were sore from having sex with her husband,” after she mentioned being sore from exercise.

Wilson also spent time chatting with a Marine captain he had known from a previous posting, asking the captain to send him a racy photo of the captain's wife. When the captain complied, Wilson asked for a pair of his wife's underwear as well.

Later, according to testimony, Wilson showed the photo to his Australian counterpart, Cmdr. Greg Mapson, and made crude comments about it.

At Wilson's Darwin office, his behavior was similarly unprofessional.

He sent unduly personal and coarse texts to one female officer, and made a female civilian employee distraught by logging on to her unattended computer to send an email to Mapson, asking him on a date.

While these events were relayed in detail at Wilson's trial, the report indicates the generals with authority over the colonel at the time never learned the specifics of his misconduct.

The report includes interviews with Lt. Gen. John Toolan, then-commander of Marine Corps Forces Pacific, who also had oversight of Wilson while he was in Australia. IG officials note in the report that they considered calling Toolan back to active duty out of retirement for the investigation, but determined such an action “was not supportable.”

Wilson arrived in Australia from a previous posting in Okinawa on Feb. 16, 2016, to take over the liaison position.

Nicholson and Toolan were not made aware of his bad behavior unit Feb. 24, after he had sent the “joke” email and sent inappropriate texts to the female officer. Toolan was informed first, and he called Nicholson, who was elsewhere in the Pacific, to tell him of the problem. Toolan told investigators he had been informed about Wilson's drinking and the text messages, but not the exchange of the risque photograph or other inappropriate comments.

“I had the conversation between MEF, I mean, I was most concerned, to be honest, about

the drinking and the behavior and the, image that Wilson was projecting to the Australians,” he said, according to the report. “But then on top of that when I heard about, uh, inappropriate emails to an Australian soldier, I said, 'this is the straw that broke the camel's back … that's the reason why we should send him home.'”

Nicholson maintained to investigators that some of the allegations against Wilson were vague, and others lacked credibility.

“Col. Wilson told Lt. Gen. Nicholson that he was the victim of personality conflicts and

individuals who did not understand his sense of humor,” the report states. “Lt. Gen. Nicholson viewed this narrative as credible and told IGMC he viewed the allegations that emerged in Darwin as 'he said, she said,' and that he believes Col Wilson did “nothing criminal … nothing illegal. He hadn't broken the [Uniform Code of Military Justice]; he had just been stupid.”

Between Toolan and Nicholson, there was a consensus: Wilson needed to leave Australia fast, but further investigation was not required. He was en route back to Okinawa on Feb. 27.

An unidentified officer interviewed in the investigation highlighted the political backdrop against which all these decisions unfolded.

“Contextually, our relationship in Darwin, l don't want to say it's tense, but it's always been somewhat politically charged,” the officer said. “We're there as guests.”

Wilson would stay in Okinawa for another month, then be transferred to his next duty post in April: a staff job as operations officer for II Marine Expeditionary Force at Camp Lejeune.

According to a senior official close to the events in Darwin who spoke with Military.com, Wilson had already been slated to move to II MEF in North Carolina after completing his tour in the Pacific.

His wife had been living in Beaufort, South Carolina, and II MEF was short on colonels, so the job seemed a good fit. Little was communicated to Wilson's new command about the ignominious circumstances under which he had left Darwin, in part because little was known about the specifics even at his original command.

“They were apprised of [Wilson] being moved out of Australia early,” the official said. “There were we had no clue about, other than hearsay.”

The official added that Wilson's command structure had no aversion to putting officers in the Officer Disciplinary Notebook, a database that flagged cases of officer misconduct to the highest levels of command. In fact, the official said, III MEF in the Pacific had one of the highest rates of assigning officers to the ODN in the entire Marine Corps.

But in this case, the two generals assessed the move was simply not warranted.

During a two-week period in July, Wilson would befriend the family of a major in his command. A military jury determined he had used his closeness to the family to molest the major's six-year-old daughter. The allegations of these crimes sent shock waves through the military community, particularly among those who had known Wilson.

It wasn't until September 2016, shortly before Wilson was formally charged with child sexual abuse, that the issue of Wilson's behavior in Darwin was revisited.

On Sept. 9, the commanding general of II MEF, Maj. Gen Walter Lee Miller Jr., directed the legal branch of 2nd Marine Air Wing to investigate allegations of misconduct that had come to light over the court of Naval Criminal Investigative Service's investigation into Wilson over the summer. Two weeks later, the Marine Corps Inspector General took over the new probe.

While Wilson's behavior in Australia was completely separate from his actions in North Carolina and his conduct of a different nature, it was perceived that the new scrutiny was directly related to what would quickly become a high-profile criminal case.

Nicholson told IG officials that the office was motivated to pursue the new probe into Wilson's handling in Darwin only because of “the optics of the heinous crimes that Col. Wilson is now accused of in matters totally unrelated to this investigation,” according to the report.

As a result of the IG finding, the assistant commandant of the Marine Corps, Gen. Glenn Walters, counseled Nicholson directly.

“Having personally spoken with Lt. Gen. Nicholson, I am satisfied that he is now fully cognizant of the regulations and his responsibilities as a senior officer and commander regarding the reporting of officer misconduct,” Walters wrote in a Sept. 2017 letter concluding the investigation. “I find this matter appropriately resolved and now closed.”

Though the action was administrative rather than punitive, multiple sources told Military.com it likely spelled the end of Nicholson's career.

“It's unlikely that he is going to receive an advancement or a subsequent nominative assignment,” a senior defense official with knowledge of planning told Military.com.

Nicholson, a 38-year infantry officer officer, served in Ramadi, Iraq in 2004 and commanded 5th Marine Regiment in Fallujah in 2005, then went on to served as commanding general of 2nd Marine Expeditionary Brigade in Helmand Province. During the two eventful years he has served as commanding general of III MEF, he has worked to maintain peace and strengthen partnerships amid aviation mishaps and heightening tensions in the Pacific.

Nicholson declined to comment publicly on his own career.

“I am honored to lead the great Marines and Sailors of III MEF every day,” he said in a statement. “We are decisively engaged here in Asia every day with a challenging mission profile that keeps all of us busy and focused on warfighting. Just today North Korea launched another missile into the waters near Japan. III MEF forces remain alert and engaged in the region every day working closely with our allies and partners. We are and will remain ready if called to fight tonight.”

As for Wilson, it's difficult to speculate about what might have been different had he been designated for further discipline following the episode in Australia.

Adrian Perry, the mother of the girl Wilson was convicted of abusing who has since come forward publicly to advocate for military sexual assault victims, told Military.com she saw a command coverup in what had transpired in Australia.

“Wilson's misconduct in Australia warranted serious punitive action. How he was able to do what he did in Australia and then be given the position as the II MEF is beyond me,” she told Military.com.

As for how events mind have unfolded differently if Wilson had been marked for discipline in Australia, there's little doubt in Perry's mind.

“Their failure to punish Wilson cost one of our daughters her innocence, and to me, that's unforgivable,” she said. “… We believe that if the III MEF Command had properly punished Wilson for his misconduct in Australia, he would never have been able to harm our daughters.”

For the senior official close to events in Darwin who spoke to Military.com, the question continues to be troubling. He wonders, he said, if the chain of events that ended with Wilson's crimes in North Carolina could have been stopped.

“Service discrediting is not strong enough ,” he said. “It eats at me because it goes against everything the Marine Corps stands for.”