An Oceanside, California, man with a diagnosed mental illness bought a gun legally two months ago, then emptied the five-shooter... 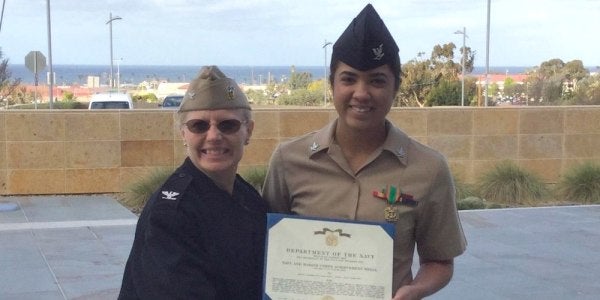 An Oceanside, California, man with a diagnosed mental illness bought a gun legally two months ago, then emptied the five-shooter into a woman who lived downstairs last week, a prosecutor said Tuesday.

After the ambush killing on Friday, detectives found the 24-year-old victim’s name — as well as two others names — scrawled in ink on the radiator tank under the hood of the accused shooter’s brand new Toyota.

They also found the words “rest in peace” and references to the Quran, Deputy District Attorney Keith Watanabe said.

The prosecutor’s detailed account of the apparently unprovoked killing of Devon Rideout came during an arraignment at the Vista courthouse for 25-year-old former Marine Cpl. Eduardo Arriola.

Arriola is accused of gunning down Rideout, a Navy corpsman, shortly before 4 p.m. Friday at their apartment complex on Los Arbolitos Boulevard, north of state Route 76.

The defendant pleaded not guilty to murder and a special circumstance allegation of lying in wait — an allegation that means he faces life in prison or the possibility of execution if convicted.

Arriola, who was reportedly attending a community college, lived with his family in the apartment above the victim, Watanabe said. There is no indication that Rideout and the defendant had any sort of relationship.

Arriola’s defense attorney said in court that her client had been born and raised in Oceanside and had no criminal record.

According to the Marine Corps, Arriola joined the military in August 2011 — the same year he graduated El Camino High School, according to his Facebook page. His job in the military was aircraft technician.

Arriola, who had no deployments, was discharged last September. The Marine Corps was not able to say what sort of discharge Arriola was given.

He was last assigned to the Wounded Warrior Battallion in San Diego, according to the military.

Watanabe said Tuesday that Arriola had deserted the military in 2016, fleeing to Mexico. In 2017, he returned to the United States, turned himself in and was arrested by the military, the prosecutor said.

He also said Arriola’s diagnosis of schizophrenia was made after his return from Mexico.

It was not immediately clear how he was able to purchase a gun legally in California in May. Watanabe said the gun dealer did not have access to military records.

He said it appeared that Arriola lied on the application, which asks if the buyer has been diagnosed with a mental illness. “We don’t believe he would have been allowed to purchase a firearm had those questions been answered truthfully,” the prosecutor said.

On the afternoon of the shooting, Rideout had just arrived home from work at the hospital at Camp Pendleton. Still wearing her uniform, she started to take her puppy for a walk when she was ambushed steps from her front door, Watanabe said.

The assailant emptied a .38-caliber Smith and Wesson five-shot revolver, shooting Rideout three times in the chest and twice in the head. As she struggled through her last breaths, the gunman prevented bystanders from helping her, the prosecutor said.

Arriola remained at the scene. Oceanside police took him in for questioning, and arrested him about 12:30 a.m. Saturday, less than nine hours after the fatal encounter.

Watanabe said Arriola confessed to being the shooter, telling investigators he shot Rideout because she was trespassing.

“We believe this was a pre-planned killing in which he ambushed the victim in broad daylight,” the prosecutor said.

After court, Watanabe said police detectives have not yet been able to identify the other two people whose names were written on Arriola’s car radiator.

The prosecutor called Rideout’s death “senseless and tragic,” and said “there was nothing the victim could have done to prevent this killing.”

Rideout’s family attended the arraignment, and cried as they listened to details of the attack on Rideout. Afterward, they issued a statement through Watanabe in which they said she was “a faithful servant in the military.”

The prosecutor said Rideout was about to start schooling to become an occupational therapist, and “her family believes she had a very bright future.”