Inside a track, I watched men snap like I’d only seen during torture scenes on film. 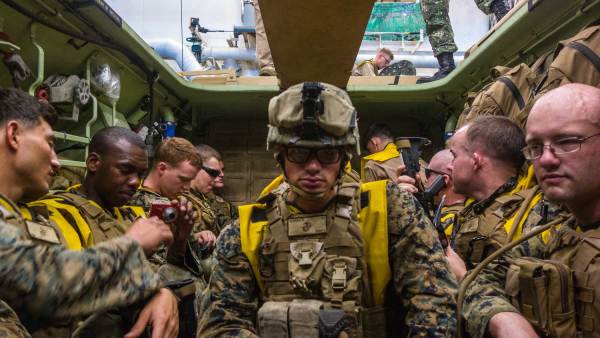 We’re piled on top of each other 15, sometimes 20, at a time, in a vehicle built for 12. Our weapons and gear double our volume. Once in, we can’t move.

It’s just as difficult to breathe. The diesel fumes fill the unseen space inside the cabin.

This is what it’s like to ride inside an amphibious assault vehicle (AAV), a machine that’s built to take a squad of Marines from sea to shore. And once we enter, we never know for how long we’ll ride, for how long we’ll struggle to breathe or to fight a claustrophobia we didn’t know we had.

On paper, AAVs—or tracks, as we called them—were impressive. The body looks like a giant rock, something you’d toss into the water to watch sink. But when fully operational, a track can launch from a ship into the open sea and travel for hours over water. Its buoyancy places half the track’s body underwater. To watch a track travel through water is to see more a feat of modern engineering than military might. It appears like a half-sunken vehicle that can hardly stay afloat. This unintimidating aesthetic earns it another nickname: iron duck.

Once onshore, though, the track thrives. It seamlessly travels across the earth, crushing roots, conquering hills, and gliding over sand. I don’t think there’s any chunk of earth under a 45-degree grade that a track can’t traverse. That is, again, if it’s fully operational.

During a night exercise on Camp Lejeune, my unit traveled by tracks across a bay between two parts of base. Our training mission was to conduct a fake raid on a fake village occupied by an opposition force of actors. In the bay, our track started to sink. As water rushed into the main cabin, the guys popped off the lid to escape through the top. We’d all received water egress training: what to do in the event of a sinking track. But that was inside a warm, clear pool, wearing no extra gear. No one prepared us for how to jump from a track into cold, black water at night.

Related: 'The war can’t go on unless all the poop’s burned’ — A Marine looks back at the invasion of Iraq, 17 years later

After a second track pulled alongside the sinking iron duck, the guys started jumping from one AAV to the other, each one taking with him his assault pack and rifle. Each one adding to the already too-full cabin, until, one by one, 30 packed into the cabin built for 12. Inside, the cursing and anger intensified. A fight would have broken out if we had been able to move.

A track could break any man’s will. Seldom would the drivers pop the top and allow us fresh air. That only meant extra work for them, which benefitted them none.

That meant, once inside, we were completely incapable of tracking our speed, direction, or progress. When you can’t see where you’re going, every turn, every pause, every acceleration feels useless. There was no way to tell which way was which. Where we were. How fast we were moving. Why we were stopping.

If on water, the disorientation expedited sea sickness. You’d hold the sickness back for as long as you could, but you never knew how much longer you had. Five more minutes? An hour? Two? More than once, I had to remove my helmet from my head, heave inside its bowl, and, before running ashore, place it back on my head.

Inside a track, I watched men snap like I’d only seen during torture scenes on film. They’d scream, shake, fight for any chance to redeem themselves for a moment and feel autonomy again.

Autonomy and Marines are a true dichotomy. To be a Marine is to lose your autonomy, but to be a Marine is—in every Marine’s opinion—to become the epitome of a man: free and powerful. But we control nothing. Not the food we eat. Not the places where we travel. Not the haircuts we get. The Uniform Code of Military Justice covers all aspects of our lives, from the way we walk to the type of sex we have (sodomy remains a crime).

In my unit there was a rumor that a guy from another unit was punished for receiving a sunburn so bad that he couldn’t train. His command apparently cited him for “damaging government property.” Because that, ultimately, is what we were. Expendable, utilitarian property. And like any property, it requires ordinances. Rules to control its appropriation and uses.

Related: The Marine Corps' first new amphibious vehicle since Vietnam is getting a 30mm cannon

Marine Corps doctrine, made of regularly updated orders, regiments our lives. But the doctrine also has exceptions. We know this because the guidebook also states that 12 Marines are supposed to ride in a track. And I’ve never ridden with so few. And this is what’s maddening. This is what breaks us. Because every chance the Corps gets to break or bend the rulebook, it does. That’s how sergeant major got away with drunk driving a week after he punished a kid for the exact same infraction. It’s how we can fill a track with more than 12, but a Marine caught without a belt around his waist will be sent back to his barracks three-quarters of a mile away to fix himself before he can eat.

Tracks embodied both my hatred and love for the Corps. An AAV is unlike anything in nature. The way tracks travel on land is nothing less than a tactical miracle. Terrain once unapproachable becomes simple to cross. AAVs were mesmerizing. Inspiring, but also tragic.

They represented indifference, hypocrisy, and incompetence. They promised to lead us to our targets, but too often broke, or sank. They were vehicles of warfare that treated the men inside them like the enemy, filling their lungs with smoke and minds with hatred. They were vehicles of confinement, mobile prisons that used our desire for combat to bait us inside their cells. Once inside we were at the mercy of a man we could never see—a driver at the seat who made decisions to stop and go that we could never comprehend.

But when, and if, we made it to our target, adrenaline flooded out all other thoughts. We’d forgive the track, grateful for a taste of combat—even if it was just pretend. We’d sprint out its back with war cries, elated by the moment, grateful for its smoke, and constriction, and disorienting journey. We’d rush out its back feeling freer than we’d ever felt before.

We felt joy by juxtaposition, a rushing high relative to the depressive low we had been immersed in moments before. It was the smile of an abusive lover, a tantalizing draw back into its embrace, until we ran about the compound and someone yelled, “Mission complete.”

Then we’d run back onto the track, high-fiving and celebrating, until the back door cranked shut, and the daylight turned to dark.