Tyler James Yeager, a 39-year-old former scout sniper in the U.S. Marines, has been arrested in relation to multiple home... 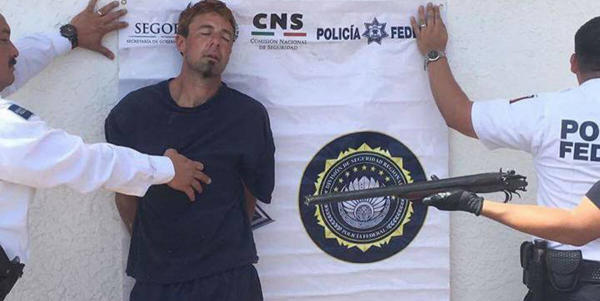 Tyler James Yeager, a 39-year-old former scout sniper in the U.S. Marines, has been arrested in relation to multiple home break-ins near Tijuana and is under investigation for possible involvement in two homicides.

Residents in the area, frustrated by a slew of robberies, started a private Facebook page and distributed flyers with Yeager's California identification card, which was reportedly left behind at the site of a break-in.

Mexican authorities said on Tuesday that he had been in custody since Sunday afternoon, when federal police arrived on the scene of an alleged break-in and found Yeager leaving. Yeager was reportedly armed with a shotgun.

The owner of the home walked in on Yeager and then flagged down federal officers on a nearby road, according to a federal-police report, cited by The San Diego Union-Tribune.

The home was in San Antonio del Mar, a coastal strip south of Tijuana and north of Rosarito, where many residents are Americans.

Jorge Alvarez, the assistant attorney general for Baja California state, said prosecutors were getting ready to charge the American with using violence to burglarize a home, according to The Union-Tribune.

“Some neighbors mentioned that he could be related with homicides of some people in the area,” Alvarez said. The assistant attorney general said authorities were looking into potential connections between Yeager and a group of people who could have been involved with the killing of two elderly people in the same area.

Yeager was reportedly already on the radar of Mexican authorities. In late February, officers searched a home, the owner of which was a relative of Yeager, that was the site of drug use and where authorities found false documents and vehicles reported as stolen.

After residents of Tijuana's San Antonio del Mar enclave urge the capture of former U.S. Marine, he is behind bars: https://t.co/tdwc6Kks1Z pic.twitter.com/MZwaM2fHtL

“The day before yesterday we detained a foreign person for robbery with violence, of whom we were already aware of as one of the inhabitants of one of the domiciles that we raided,” Alvarez said on Tuesday. “Moreover there were signs from neighbors that he was a dangerous person.”

Yeager was found guilty in Montana of a 2014 sexual assault and of driving under the influence of alcohol in 2015. A warrant was issued for him after he didn't pay $1,185 worth of fines related to those crimes and failed to appear at a hearing.

Mexican authorities also said on Tuesday that Yeager was wanted in Montana. The U.S. Consulate General in Tijuana would only confirm his arrest.

US servicemen have run afoul of the law in Tijuana before. In one noteworthy case, Andrew Tahmooressi, a Marine sergeant in Afghanistan diagnosed with post-traumatic stress disorder, was arrested in March 2013 while crossing the border while in possession of several loaded weapons, a serious crime in Mexico.

He was released in November 2014, after outcry by many in the U.S., including conservatives and television personality Montel Williams, who has also chimed in about Yeager's arrest.