U.S. Marines have been on the ground fighting ISIS in Syria since March, when a detachment from an amphibious task force arrived … Continued 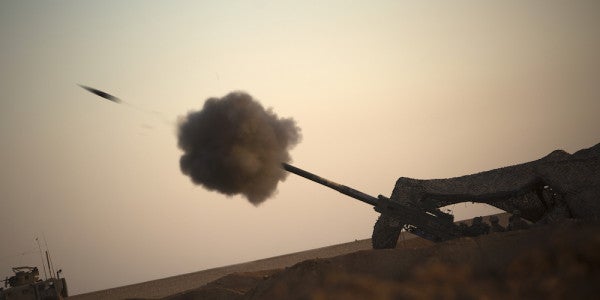 U.S. Marines have been on the ground fighting ISIS in Syria since March, when a detachment from an amphibious task force arrived in the country, where they joined U.S. special operations forces to support partner forces.

The Marine units deployed to Syria included elements of an artillery battery that can fire 155-millimeter shells from M777 Howitzers.

The Department of Defense has already released footage and photos of Marines in Syria firing their howitzers in support of local coalition partners during their advance on Raqqa, ISIS' self-declared capital in northwest Syria.

“The Marines have been conducting 24-hour all-weather fire support for the Coalition’s local partners, the Syrian Democratic Forces,” the Pentagon said at the time that footage was released.

During the first week of July, the U.S. military released the first footage of Marine artillery units striking an ISIS target on May 14, destroying what the Defense Department called an ISIS artillery position in support of Syrian Democratic Forces.

The M777 Howitzer has a range of 15 to 25 miles, and the artillery units in Syria have moved at least once to support the ongoing fight against ISIS there, Marine Commandant Gen. Robert Neller told Military.com in April.

“The fight evolves, so they're moving to where they can best provide support based on the capability of the weapons system,” Neller said. “The commanders there understand the capability, and they'll reposition them as required in order to provide the fire support and other effects they need to do to make the campaign successful, ultimately.”

Marine artillery units previously deployed to Iraq to support the fight against ISIS there were set up in a fixed position — though they came under fire just hours into their deployment in March 2016.

U.S. forces in Syria are aiding local partner forces in what Defense Secretary James Mattis has called an “annihilation campaign,” seeking to surround and destroy ISIS fighters — foreign fighters in particular — “so we don’t simply transplant this problem from one location to another,” Mattis told reporters in May.

Mattis “asked me and the military chain-of-command to make a conscious effort not to allow ISIS fighters to just flee from one location to another,” Marine Gen. Joseph Dunford, the chairman of the Joint Chiefs of Staff, told Defense News in June.

“Our commanders on the ground have tried to meet that goal of annihilating the enemy in order to mitigate the risk of these terrorists showing up someplace else.”

Fighting to retake Raqqa has already begun, and over 2,000 ISIS militants are thought to remain there.

U.S. special-operations forces are already working with Arab and Kurdish partners to vet and train a force to secure the city during and after the effort to oust ISIS. Questions remain about how Raqqa and the surrounding area will be secured, as well as about how territory wrested from ISIS around Syria will be divided among the various factions operating in the country.

The U.S.-led coalition and its partner forces have already come into conflict with Syrian pro-regime forces, which are backed by Iran and Russia. Southeast Syria near the Iraqi and Jordanian borders has been a flashpoint for these confrontations, though a local ceasefire has recently gone into effect there.