"As long as he's a veteran, he's got brothers and sisters." 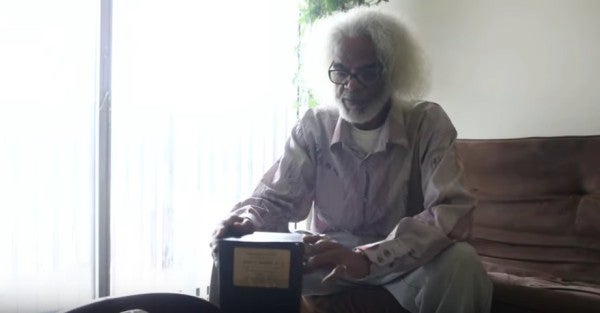 KALAMAZOO, MI — A veteran himself, Paul Burbridge believes those who served our country deserve an honorable burial.

While cleaning at Deer Run Apartments in Kalamazoo, Burbridge found a box of cremated remains with the name James H. Mitchell Jr. on the box.

Through some investigation of his own, Burbridge discovered the remains he found under a stairwell in the complex were those of a U.S. Marine Corps veteran who served during the Korean War from 1952 to 1954.

Paul Burbridge talks about finding the cremated remains of James H. Mitchell Jr. that he found under a staircase at Deer Run Apartments in Kalamazoo, Michigan (MLive.com video)

Burbridge was determined to honor the Marine.

After Mitchell's status as an eligible veteran was confirmed, his remains were interred at Fort Custer with full military honors, Morris said. The American Legion Riders attended the ceremony Monday to honor the former Marine. Burbridge was presented with an American flag during the ceremony and a rifle salute was performed, Morris said.

“I'm still crying,” he said after the ceremony Monday. “It was simply beautiful.”

Burbridge is a U.S. Navy veteran, serving from 1980-83, he said. He stays busy cleaning apartments at the Kalamazoo complex, where he also lives.

After finding the remains while cleaning under a stairway one day, Burbridge first checked to make sure they did not belong to anyone currently living at Deer Run.

He ultimately discovered Mitchell's status as a former Marine, but could not track down any living relatives. Burbridge also discovered that Mitchell was cremated on May 26, 2000, after dying at the age of 67 in Illinois.

Nearly 20 years later, Burbridge found the man's remains and took on the mission of ensuring Mitchell would receive the military honors he was owed.

“He's been traveling for a while now,” Burbridge said of Mitchell.

While waiting for verification of Mitchell's veteran status, he said the veteran's remains never left his side.

“As long as he's a veteran, he's got brothers and sisters,” Burbridge said. “He has a large family.”