"In the summertime, when we have the maximum number of recruits, both men and women, going through recruit training, the facilities don't support having them live in the same barracks." 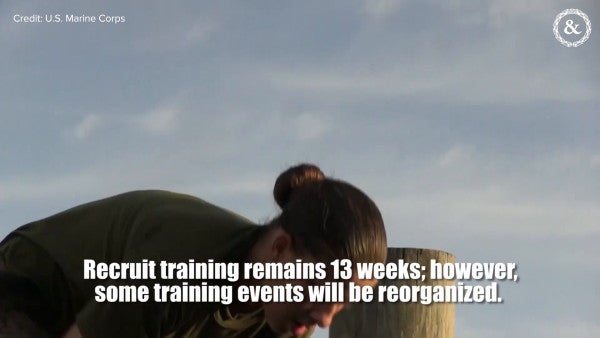 Some men and women attending Marine Corps boot camp are training more closely together than ever, but the training is unlikely to be fully integrated, the service's top general said this week.

Marine Corps leaders are currently reviewing the performance of the first-ever coed company that lived, trained and graduated together in March. In some areas, they performed better than other companies and in other areas worse, Commandant Gen. Robert Neller told Military.com at the Sea-Air-Space conference outside Washington, D.C.

That has led to a look at where there's opportunity for training to be further blended, Lt. Gen. David Berger, the general officer nominated to replace Neller as commandant, told lawmakers last week. But it's not possible for Marine Corps boot camp to ever be 100% coed, Neller said Monday.

“In the summertime, when we have the maximum number of recruits, both men and women, going through recruit training, the facilities don't support having them live in the same barracks,” he said.

The women who joined the previously all-male company earlier this year lived in barracks where men also stayed, but the female recruits had their own squad bay.

Despite long-term housing limitations, Neller stressed that men and women at Marine Corps Recruit Depot Parris Island, South Carolina, spend much of their time training together.

“It's not like we're trying to keep women over here and men over there,” he said. “After the first phase, almost everything male and female recruits do at Parris Island is together.”

The Marine Corps is the only service that separates male and female recruits during portions of their boot camp training. Some have said the move creates a gender divide that can last long into Marines' careers as the service fights to end gender bias.

Neller pushed back on that idea, though, saying 65% of the training Marine recruits at Parris Island get is coed. Men and women go to the rifle range together, conduct field training together, and sit in a squad bay together while they're mentored by senior drill instructors, he said.

SEE ALSO: The next Marine Commandant says another gender-integrated boot camp class could happen in 2020

WATCH NEXT: Gen. Neller Sounds Off On Tattoos In The Marine Corps