Marine Cpl. Bryant Scott was dying when he arrived at a San Diego hospital in late July. Suffering from heat... 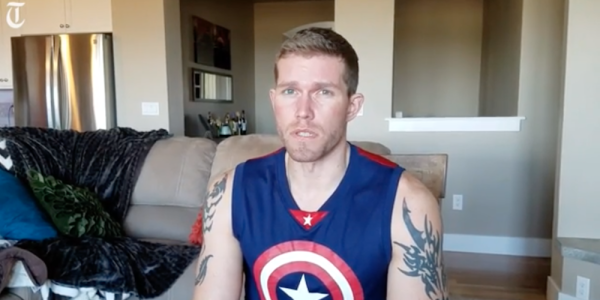 Marine Cpl. Bryant Scott was dying when he arrived at a San Diego hospital in late July.

Suffering from heat stroke, the 27-year-old’s liver was shutting down and his heart stopped several times.

Doctors told the Kennewick native’s family there was a 10 percent chance of his recovery.

But eight months after waking up from a 14-day coma, Scott finished the 50-mile Badger Mountain Challenge on Saturday.

The run that cost Scott a career as a Marine, his liver and nearly his life started at 7 a.m. on a hot July day at Camp Pendleton in San Diego County.

He had donned 45 to 55 pounds of gear for 13-mile navigation exercise across mountains and rivers.

As he was running, the desert temperature spiked to 109 degrees. Scott, already on the course, continued running. He was out ahead of his companions when his body shut down about 100 meters from the final checkpoint.

“They found me in a dried river bed. I was completely out,” Scott said. “I had a deep gash in my head. I had been bleeding for a while.”

He was flown from the scene, and was already in a coma when he arrived at the hospital.

“My heart kept stopping,” he said. “I was having massive cell death. I only had a small amount of time to live.”

Doctors removed his liver, and while that stopped his deterioration, he would need a liver transplant.

When Scott eventually woke up, he had lost 65 pounds of muscle. He couldn’t lift his arms, couldn’t sit up and had dozens of staples across his mid-section.

But Scott was determined to get better. By late September, he was released from the hospital to a rehabilitation center and returned to his mom Lanette Adams’ home in Kennewick in late December.

“I wasn’t in good shape,” he said. “I was emotionally and physiologically broken down. I had a lot of remorse because I wasn’t overseas with my (Marine) brothers. I just kept praying and working.”

Then in mid- to late January, Scott saw the sign for the Badger Mountain Challenge, and he decided he would tackle the 50-mile trail run with its steep climbs and descents.

His 3 1/2 -year career as a Marine ended with his collapse, and he’s now on terminal convalescent leave.

When he finishes the leave, Scott will be honorably discharged.

“The thing they kept saying was that your mission is to recover,” he said. “I have received nothing but love from them. … I felt blessed to be part of the Marine Corps.”

He wanted to run the course for his fellow company of Marines, who are deployed in Syria.

When he was in peak condition, Scott could run three miles in 18 minutes. Last weekend, he trudged through the rain, tripping over his feet. He met others along the trail as morning slipped into afternoon and then into night.

As it reached 11:30 p.m. and the race was supposed to wrap up, organizers allowed him to go on. He simply kept running through the rain and dark.

“I wasn’t in a hurry to finish. I was just going to finish,” he said. “I was happy because I was actually there rather than lying in a bed.”

Then, at 1:30 a.m. Saturday, tired, bruised, and cramped, Scott crossed the finish line.

His family met him at the finish with a sign showing the date of his liver transplant and the date of the race.

On Monday, he was still sore, but thinking about his next challenge.

“Doing something one time sets the bar for future events,” he said. “I know I’ll do a lot more 50 milers and marathons.”