“I’m filled with great rage, because our family was robbed of (Cox), and we may never get an explanation." 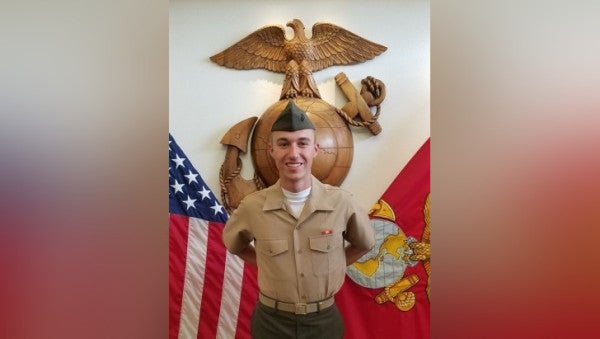 DIKE — A Dike-New Hartford graduate and U.S. Marine who “always had a smile,” friends say, was laid to rest Saturday after he was killed in a military training accident.

Private First Class Tyler Knight Cox, 19, was memorialized as 100 relatives and friends looked on at his high school auditorium on a sunny day — mirroring the Dike native’s personality.

“No matter how serious the situation was, no matter how hard the training, he always had a smile — ‘We can do this,’” remembered Kenyon Phipps, a fellow Marine who befriended Cox when the two went through boot camp together.

Officiant Juli Camarin, a pastor at Orchard Hill Church and friends with Cox’s father and stepmother, Mike and Sara Cox, said the couple told her Cox could make friends quickly.

“Mike boasted about his magnetic personality,” Camarin said at the service. “He drew and welcomed people in.”

In his obituary, Cox was described as an “entertainer” who lettered in high school drama, was a part of nearly every school play and participated in concert and show choirs.

He graduated early as part of the Class of 2019 to join the Marines, and was assigned to the 3rd Battalion, 8th Marines as an infantry rifleman.

He was stationed at Camp LeJeune in Jacksonville, N.C., when he was killed in a training accident April 29, according to the Marines. Circumstances surrounding the accident were still not available more than two weeks later.

“I’m filled with great rage, because our family was robbed of (Cox), and we may never get an explanation,” Sara Cox said in a letter read by Camarin. “Our family is forever broken. Nothing will ever be the same.”

Phipps said he had felt that way too.

“I was upset, I wanted to cry, I wanted to hit something,” he said, upon hearing the news. “I got my bearings together, and I remembered the kind of person Tyler was.”

Camarin, who got to know a young Cox as a student in her Bible study class as the “7-year-old kid with a grin and a cookie-crumb face,” said Cox was a different young man when she last saw him at Christmas.

“He was a magnificent Marine — so calm and so confident. And a presence in the room, like he had found his calling,” she said.

Phipps described the Marine he knew, too — the one who fell asleep on security duty standing against his rifle, the one who “could eat out of house and home,” the one who snuck a dozen doughnuts into the movie theater down the back of Phipps’ jacket.

“We do know that he wouldn’t want us to be upset or sad,” Phipps said. “If he could be up on this stage with me, he would either be doing something completely crazy, or doing that cheeky smile.

Cox is survived by parents Michael and Sara Cox of Dike, mother Kim Knight of Wapello, brother Tanner Cox and sister Tessa Cox. He was buried in Elmwood Cemetery in Dike with military honors by the U.S. Marine Corps and accompanied by the Patriot Riders.