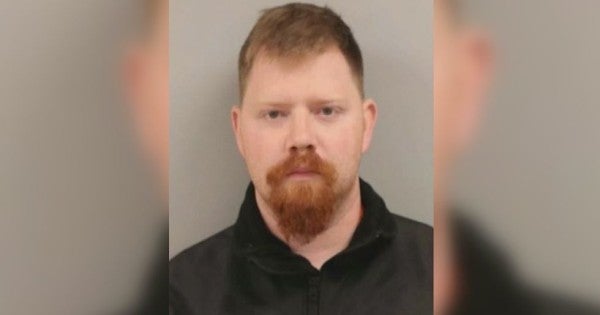 Dustin Peters, 25, was initially charged with state offenses after security personnel discovered the arsenal in his car during a routine search at a gate of the Coast Guard facility Jan. 9, according to authorities. He was re-arrested on federal charges of unlawful possession of a firearm in a federal facility and one count of unlawful interstate transport of a machine gun.

A base security officer saw hollow point ammunition in his car during the check, leading to a further search of his Jeep, federal authorities said.

In the trunk, Coast Guard security personnel found a loaded 9mm semi-automatic pistol, loaded with seven live rounds, including one round in the chamber, an FBI agent wrote in a criminal complaint. The AK-47 and several magazines were in the same area.

Peters gave police permission to continue searching the vehicle, according to the complaint. A bayonet knife, hatchet, gas mask, ballistic vest, fire resistant hood, a medical kit, flare gun and numerous types of ammunition were among items authorities said were recovered during the search.

In an interview with police, Peters said he loaded the items in his vehicle and drove from North Carolina, through Virginia to Cape May for a “family event” at the Coast Guard base.

Though he claimed to have no permanent residence, Peters was last lived in Wilmington, North Carolina.

Peters also told police he bought the AK-47 rifle in Virginia, but modified the weapon to fire fully automatic, according to the FBI agent's account. He admitted to knowing the modifications were illegal.

During questioning, Peters also said his father warned him against taking the weapons onto the Coast Guard base, authorities said.

“Peters acknowledged that he did not listen, stating that he knew it was possible that he may be stopped, but was not expecting that to actually happen,” an agent wrote in the complaint.

After his arrest, Cape May County authorities said Peters was planning to attend a graduation at the base and it was unclear why he arrived with the weapons.

“The Coast Guard has no reason to believe that this individual is a threat to the command or local community and we will continue to work to keep our community safe,” the agency said in a statement last week.

Cape May County jail records show Peters remained in custody on state weapons offenses. He was scheduled to appear in Camden federal court Tuesday. Attorney information for him was not immediately listed.

Have a tip? Tell us: nj.com/tips. Get the latest updates right in your inbox. Subscribe to NJ.com's newsletters.