The Marine Corps' new commandant is not one to micromanage -- but he expects his leaders to be squared away and put their Marines on the right path when they're misbehaving. 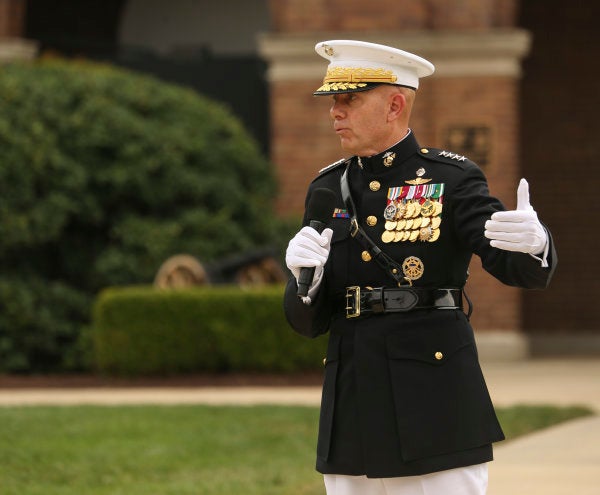 The Marine Corps' new commandant is not one to micromanage — but he expects his leaders to be squared away and put their Marines on the right path when they're misbehaving.

Gen. David Berger is not the first commandant who might encounter discipline problems in the ranks. But he's one of just a few who have led the Marine Corps in the age of social media, where some Marines have made career-ending decisions.

That has included racist photos, a video showing Marines defiling enemy remains, posts that degraded women and negative comments about the commander in chief.

“What's interesting to me, is over the last couple of years, ungoverned — it's not structured, it's more like it grew up on its own — is this self-policing on social media,” Berger, who became the commandant on Thursday, told Military.com in an exclusive interview this week. “… That's pretty fascinating to me.”

It's not an easy problem to deal with, as Gens. Jim Amos and Robert Neller found during their tenures as commandant. Neller, who had to deal with the fallout from a massive online scandal, even said during Thursday's passage of command ceremony during which he passed the torch to Berger that there were days when he woke up when he didn't want to be commandant.

“Dave, there are days when you wake up that you just don't want to be the commandant,” he told Berger. “But you are the commandant, you are our commandant. So … get out there and do the job and everyone else will follow.”

Policing social media use for the military's youngest force is a hefty mission. Over the years though, Marines, veterans and other watchdogs have begun stepping in to report inappropriate posts when they see them. Screen shots of a lance corporal's white supremacist posts, for example, were posted on Twitter by a Marine veteran who called on the infantry assaultman's command to address the situation.

When asked if noncommissioned officers and other leads need to monitor their Marines' behavior to catch digital wrongdoing through, Berger stressed that if they do, it should be about leadership — not micromanagement.

“I think our job is first to educate always,” he said. “We should never assume that a 17-year-old Berger or 18-year-old Berger coming out of high school knows what's appropriate and not for the Marine Corps. In 13 weeks , you can cover a lot of ground, but there will be a level of detail where perhaps you need either more education or more reinforcement to what's appropriate.”

Leaders also have the incredible responsibility of setting the right example for their Marines. And even though there has been a string of commanding officer reliefs in recent months — at least six since late April — Berger said he doesn't view there being a widespread problem in the officer corps.

“The leaders that you spoke of that were relieved by the organization, the service held them accountable for their behavior appropriately,” he said. “… I am confident that Marine leaders understand that these are not ordinary standards.

“It's not easy to get in, it's not easy to stay in,” he added. “But part of the reason they [Marines] stay is because the expectations are that high.”

As commandant, Berger will have the unique role of choosing the service's next crop of commanders, something he calls the “ultimate responsibility.”

“Selecting them and then ensuring that they are held to that standard and are held accountable for their actions, their behavior, their decisions is my job,” Berger said. “No one else's.”