Authorities have arrested an ex-Marine living in Louisiana in connection with the 1976 death of a woman who was found strangled near a former military base in Orange County. 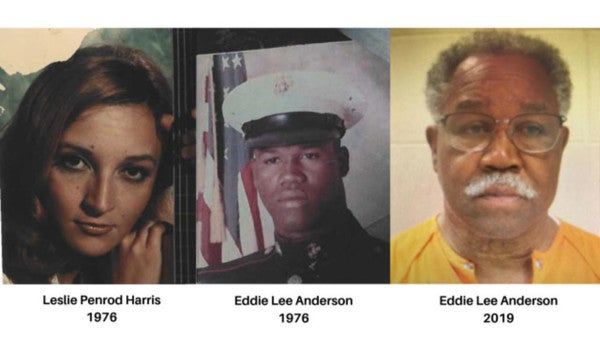 Authorities have arrested an ex-Marine living in Louisiana in connection with the 1976 death of a woman who was found strangled near a former military base in Orange County.

Experts re-examined evidence collected more than 40 years ago and identified 66-year-old Eddie Lee Anderson of River Ridge, Louisiana, as a suspect in the killing of Leslie Penrod Harris, Orange County Sheriff's Department officials said in a statement Thursday, May 30.

Investigators looking into the 1976 murder of Leslie Penrod Harris (Left) identified Eddie Lee Anderson (Center & Right), 66, of River Ridge, LA, as a suspect in the decades-old case. Harris was found strangled near a currently decommissioned military base in Irvine. Anderson is a former marine who was stationed at the base in the nearly 1970s and lived less than a mile away from the Costa Mesa Restaurant where Harris was last seen alive over 40 years ago.

She had recently moved to Orange County, and was out having dinner with her husband the night before she was killed, OCSD spokeswoman Carrie Braun said. She left a Costa Mesa restaurant alone at about 8:30 p.m., and never came back.

Her husband reported her missing after the restaurant closed. Authorities found the woman strangled about five hours later in Irvine. She was 30-years-old at the time.

Harris's body was left near the now-decommissioned Marine Corps Air Station El Toro in an area that would have been “unknown to the public surrounding the base,” OCSD officials said in a statement. That initially led investigators to believe that the suspect had some sort of connection to the military. But, after exhausting numerous leads, the case went cold for decades.

Swabs collected in 1976 containing DNA evidence were analyzed in 1997, and again in 2016, but no matches were identified. Then, in 2019, an OCSD task force working with the FBI utilized recent developments in genealogy techniques to identify Anderson as a person of interest. He was stationed at El Toro in the early 70's, and had been living less than a mile from the restaurant where Harris was last seen alive.

Anderson provided a sample of his DNA to investigators, who then traveled to New Orleans to interview the suspect on May 23. He was subsequently arrested on suspicion of murder, and taken into the custody of the Plaquemines Parish Sheriff's Office, OCSD officials said. His extradition to California was pending.

Authorities have asked anyone with information relevant to this case to contact Orange County Crime Stoppers at 855-TIP-OCCS (847-6227).