Marine Col. Daniel Wilson was sentenced to 66 months behind bars in September 2017 after being convicted of sexually abusing a 6-year-old girl. But today he's out of the brig, thanks to a rare military appellate provision invoked to overturn his conviction 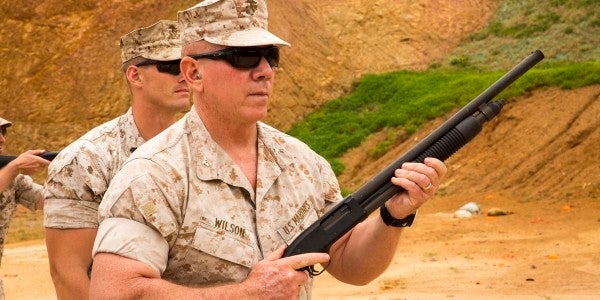 Marine Col. Daniel Wilson was sentenced to 66 months behind bars in September 2017 after being convicted of sexually abusing a 6-year-old girl. But today he's out of the brig, thanks to a rare military appellate provision invoked to overturn his conviction.

And the family of the alleged victim is calling on Congress to do something about it.

Wilson, 58, had been found guilty by a seven-member panel of generals and colonels at a
Camp Lejeune, North Carolina, court-martial of one count of abusing a child and multiple counts of conduct unbecoming an officer for episodes of apparently alcohol-fueled crude and loutish behavior while serving as a liaison officer in Darwin, Australia — a position he was fired from after just 10 days.

He was found not guilty, however, of another sexual-assault charge involving an adult woman, and of more assault and abuse charges involving the young girl and her siblings.

But in July, nearly two years into Wilson's sentence,
the Navy-Marine Corps Court of Criminal Appeals delivered a shocking ruling, determining there was insufficient evidence to find Wilson guilty. The 57-page opinion took issue with the young girl's testimony, calling it inconsistent, and noted that follow-up exams to determine sexual assault were inconclusive.

Wilson was released from pre-trial confinement Oct. 18, a Marine Corps spokeswoman, Maj. Melanie Salinas, told Military.com in a statement.
Marine Corps Times was first to report Wilson's release. With the signing of a pre-sentencing agreement, she said, Wilson was freed and placed on leave status awaiting administrative separation.

Per the agreement, when Navy Secretary Richard V. Spencer approves Wilson's retirement request, the colonel will get a “no punishment” sentence in lieu of a sentence rehearing, Salinas added. While Wilson will have a federal conviction on his record — six specifications of conduct unbecoming an officer and one of absence without leave — he will not have to register as a sexual offender, as the previous conviction guidelines stipulated.

A request for comment submitted to Wilson's family did not receive an immediate response.

Meanwhile, the family of the girl Wilson was accused of molesting is speaking out, saying the provision that freed him denies justice to victims and must be removed.

Since the court-martial, Lt. Col. Breck Perry and his wife Adrian Perry have moved from Camp Lejeune to Okinawa, Japan, where he now serves as the Force Marine Officer for Amphibious Force U.S. 7th Fleet.

He took the rare step of speaking publicly while still on active duty at a press conference held earlier this month at the Okinawa Governorate, calling for the abolition of what in the Uniform Code of Military Justice is called Article 66(c), the provision that gives the lowest appellate review court the power to vacate a jury's findings.

Perry said his command had been warmly supportive of his decision to advocate on behalf of his daughter.

“I look at this solely as a father standing up for an injustice for his family,” he told Military.com. “We're supposed to have moral courage as officers. So let's do it.”

Adrian Perry delivered a lengthy and emotional statement during the Okinawa press conference, in which she called Article 66(c) “cruel, negligent and dangerous.”

The family says there's no way that the three-judge appellate panel was able to fully understand and appreciate the lengthy court proceedings by reading the trial record, particularly in the short review period they had. To them, the summary prepared by the panel represents a distortion of the facts and improperly discounts their daughters' testimony.

Another sticking point for the Perrys is that the judge who handed down the appellate ruling, Navy Cmdr. Angela Tang, is junior in rank and seniority to each of the panel members who deliberated over Wilson's two-week court-martial. Tang, who made national headlines in 2013 as a military defense attorney for her aggressive questioning of an alleged victim of sexual assault at the
Naval Academy, is an O-5; Wilson's military jury was made up of officers in ranks 0-6 and above.

“The jury in our case is one of the most senior jury panels ever assembled in institutional memory,” Lt. Col. Perry said at the press conference. “Their combined century-and-a-half of leadership experience made them more than capable of deciding on a guilty verdict and an appropriate sentence.”

The couple pointed out that there was little recourse to the factual insufficiency finding; the next appellate court above the Navy-Marine Corps Court of Criminal Appeals, the U.S. Court of Appeals for the Armed Forces, does not have a comparable power to Article 66(c), and thus those in their position have little choice but to petition the original appellate court to reconsider its own decision.

The long-term solution, the Perrys say, is to bring the matter before Congress and have Article 66(c) removed from the UCMJ. The first step, they say, is to agitate for a hearing before the House Armed Services Committee on the matter; they anticipate a lengthy process and fight ahead.

Wilson has maintained his innocence throughout all proceedings; his former attorney, Phil Stackhouse, said in July that his family was “happy and elated” to see him go free and have the opportunity to fight for his retirement.

But Adrian Perry says the overturn of Wilson's conviction robs her daughter of the dignity she deserves.

“They still ask us if [Wilson's] still in jail,” she said of her daughters. “Because they want to be reassured.”