Marine Colonel Faces Charges For Sexual Assault Of A Child 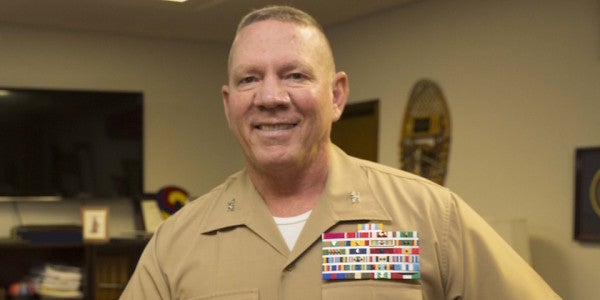 A decorated Marine colonel assigned to Camp Lejeune, North Carolina, has been removed from his post and charged with the alleged sexual abuse of a child, Military.com has learned.

The charges Wilson faces include three counts of sexual assault and sexual abuse of a child; four counts of assault and battery on a child under age 16; one count of failure to obey an order or regulation; and nine counts of conduct unbecoming an officer.

A source with knowledge of the investigation said the alleged victim was six years old.

Wilson was removed from his post and reassigned to administrative duties after the investigation into his alleged wrongdoing was launched, Armistead said. He has not, however, been jailed or confined ahead of a trial.

Related: What Happens When A 4-Star General Is Accused Of Sexual Assault? »

A date has yet to be set for an Article 32 investigative hearing into the alleged crimes, a step that occurs in the military justice system before a service member is tried.

Wilson is being represented by two Marine Corps attorneys, Lt. Col. Ben Ackison and Capt. Mark McCormick. Armistead said it's not known whether he has hired civilian counsel as well.

According to information provided to Military.com, Wilson entered the Marine Corps in 1981 and was promoted to colonel in 2010. He was assigned to II MEF on April 30 of this year. He previously served as the chief of staff for 3rd Marine Division, III Marine Expeditionary Force, in the Pacific, and as commanding officer for Weapons and Field Training Battalion, Marine Corps Recruit Depot Parris Island, South Carolina.

He completed 11 deployments over the course of his 35-year career, and his awards include the Bronze Star, the Legion of Merit, the Defense Superior Service Medal, and the Meritorious Service Medal.

“Col. Wilson is presumed innocent of any alleged offenses and will be afforded the opportunity to defend himself against all charges,” Armistead said in a statement.