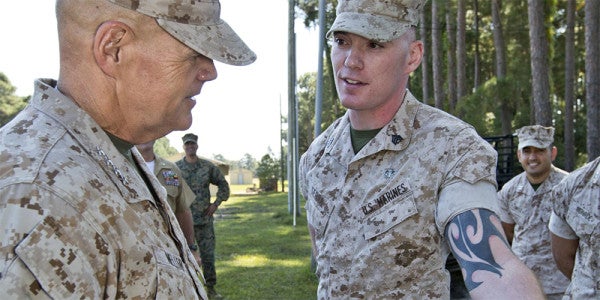 It's a fact of life: Marines love their tattoos. And despite updates to regulations in 2016 that clarified rules and gave troops slightly more flexibility on where they can put their ink, some still complain that the Corps is too restrictive, keeping out some potential recruits and resulting in denied reenlistment for others.

Some services are making dramatic changes in order to improve recruiting among millennials. The Navy in 2016 adapted the military's most lax tattoo rules, changing its policy to allow neck tattoos, sleeves, and even tattoos behind the ears. By contrast, Marine Corps rules remain relatively restrictive, barring full sleeve tattoos and limiting the size of ink designs that wrap around an arm or leg.

In an interview with Military.com in December, Marine Corps Commandant Gen. Robert Neller revealed the one thing that would prompt him to reconsider current tattoo restrictions.

“If the recruiters came to me and said, 'we can't make mission with this policy,' I would have to go back and look,” Neller said.

And he asks recruiters about the matter regularly, he said. Neller said he has a practice of approaching recruiters at national meetings and inquiring if they have trouble making monthly quotas because they have to turn away prospective recruits with tattoos. So far, he said, he has always been told that recruiters are making mission, even with regulations in place.

“So do we lose certain applicants? Yes. But can make it? Yes,” Neller said.

Neller said he's not concerned with being a stickler, and doesn't want to deny applicants who are just over the line, with a tattoo that falls a quarter inch into a no-ink zone or a word hidden under a watch band.

That said, he's not inclined to give in on one of the most common requests from inked-up Marines.

“I'm not doing sleeves; I'm not,” he said. “My wife [D'Arcy Neller] disagrees with me, she thinks I'm stupid. She says, 'How can you judge them on their ink?' I said, 'I don't judge them; I just don't want them being Marines.'”

There have been times in the past when commandants' spouses have swayed them on matters of personnel policy. In 2014, then-commandant Gen. Jim Amos reversed his unpopular decision requiring Marines to wear their sleeves rolled down, saying his wife, Bonnie Amos had “beat the crap out of him” over the matter.

In this case, though, Neller said it goes to the identity and image of the Marine Corps.

“This is not an episode of [History Channel show] Vikings, where we're tattooing our face. We're not a biker gang, we're not a rock and roll band. We're not [Maroon 5 lead singer] Adam Levine,” Neller said. “You can get 70 percent of your body covered with ink and still be a Marine. Is that enough?”