"Once they begin to understand the risks, what the impact to them is tactically … then it becomes clear. I don't blame them for that. This is a training and education that we have to do." 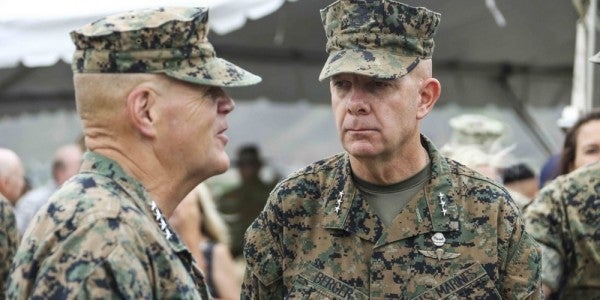 SIMI VALLEY, Calif. – Gen. David Berger, the US Marine Corps commandant, suggested the concerns surrounding a service members' use of questionable Chinese-owned apps like TikTok should be directed against the military's leadership, rather than the individual troops.

Speaking at the Reagan National Defense Forum in Simi Valley, California, on Saturday morning, Berger said the younger generation of troops had a “clearer view” of the technology “than most people give them credit for.”

“That said, I'd give us a 'C-minus' or a 'D' in educating the force on the threat of even technology,” Berger said. “Because they view it as two pieces of gear, 'I don't see what the big deal is.'”

“That's not their fault. That's on us,” Berger added. “Once they begin to understand the risks, what the impact to them is tactically … then it becomes clear. I don't blame them for that. This is a training and education that we have to do.”

Foreign-owned apps like TikTok have prompted concern from lawmakers and the military in recent months. TikTok, the viral video-sharing app from China, was investigated by intelligence agencies and the military for concerns on the “operational security risks posed … and other China-owned social media platforms that can access massive amounts of US users' personal data,” according to a letter by Senate Minority Leader Chuck Schumer in November.

To “err on the side of caution,” US Army cadets throughout high school and university were banned from using TikTok while in uniform to represent the military, a spokeswoman said in November. The act does not ban them from using it for personal use.

The app, which was formerly Musical.ly, exploded in popularity and boasted 1 billion monthly active users earlier this year. TikTok and its owner, Beijing ByteDance Technology, claims that American user data is not stored in China, nor is it politically influenced by the country.

“Let us be very clear: TikTok does not remove content based on sensitivities related to China,” the company said in a statement in October. “We have never been asked by the Chinese government to remove any content and we would not do so if asked. Period.”