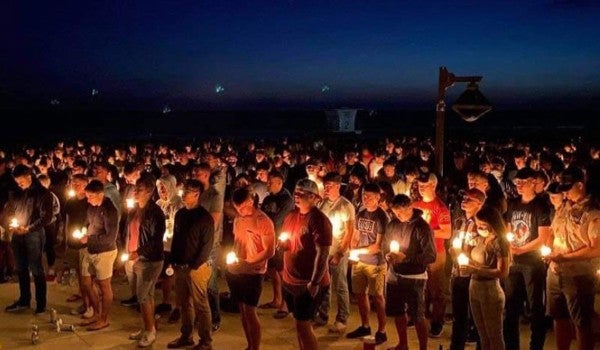 She was next to her family and surrounded by the Marines who served with her son’s unit, Battalion Landing Team 1/4. Next to her stood Aleta Bath, who like the Baltierras, lost a son when the Marines’ amphibious assault vehicle sank 400 feet to the ocean floor during training off San Clemente Island. Their sons had been roommates.

As twilight fell, a lone bagpiper came onto the stage and began playing “Going Home” as quiet fell over the crowd of more than 500.

“This is a huge testament of what family looks like,” Chaplain Jonathan Cooper said that night. “I know there are a lot of differences, but there is a common denominator for each person here. We are hurting. We are here to encourage, support and love the families who are missing their boys. We thank you for these men who willingly signed up to defend their country.”

Pfc. Bryan Baltierra, of Corona, was the youngest of the eight Marines and a Navy corpsman who died in the July 30 training accident – it was the first anniversary of his enlistment. The former track star was 17 when he joined the Marines.

Other families, too, spoke of their loved ones, including Peter Ostrovsky, of Bend, Oregon, who talked about his son, Pfc. Jack-Ryan Ostrovsky, 20, and Elena Sweetwood, of San Diego, who shared stories about her grandson, Lance Cpl. Chase Sweetwood, 19, whom she said she raised as though he was her son.

The hour-long ceremony organized by six Marine wives at Camp Pendleton included stories about the lives that were lost, words of support from Cooper and ended in a rousing “Marine Corps Hymn” sung by the Marines who gathered on the beach.

“The turnout for the vigil was incredible and displayed how true of a family the Marine Corps really is,” Evelyn Baltierra said as she prepared for another private military ceremony planned at the base for Friday, Aug. 21. “The support from our family and friends helps us remember the short, yet beautiful life my son, Bryan, lived.

“We want him to be remembered and honored for his courage and dedication to become a Marine and to serve our country,” she said. “A good support system is vital in overcoming any tragedy, and we are so thankful to be surrounded by ours.”

The Camp Pendleton vigil is among dozens of community outpourings across Southern California and the nation – organized by military members, friends and city and state officials – that are helping the grief-stricken families begin the healing process.

As the families prepare to bury their loved ones, grief experts say these public events help with feelings of isolation. Instead, they provide an understanding that their loved ones meant something to not only their immediate family and friends, but the larger community.

In several Southern California cities, including San Clemente, Corona and Riverside, flags were lowered to half-staff. The Riverside County Board of Supervisors honored Baltierra and Cpl. Cesar A. Villanueva, 21, of Riverside, during its Aug. 4 meeting.

In Montebello, city officials opened a parking lot across from the apartment where Lance Cpl. Marco “Andy” Barranco, 21, lived with his father and sister. Hundreds turned out to honor the Marine who served so he could give back to the country that helped his immigrant parents realize their dreams. Now, the Montebello City Council is commissioning a mural of Barranco. Painting is set to start in September in a park near Lincoln Avenue and Montebello Boulevard.

“For me, it will be a place I can go and take my daughter and soon-to-be-born son and tell them who their uncle was,” said Cathy Barranco, the Marine’s older sister, who has been surprised by the overwhelming support she and her family has received. “He loved living in Montebello, all his friends were there.”

Since the accident, families with no connection to Andy or the Barranco family have come over to share stories. Some are military veterans, others have sons or daughters who are on active duty. One veteran told the family he was dedicating a hike in October from Montebello to Corona to Andy, Cathy Barranco said.

“He had so many similarities to my brother,” she said. “When he and other Marine families came to our house to just to show respect for my brother, that means a lot. There were a couple of families from around the area whose sons are in the Marine Corps. They shared their experiences.

“It brings us together and connects us,” said Cathy Barranco, whose husband also serves in the Navy. “We talked about what he did and what he wanted to do, and it helps to having that connection and closing that gap.”

The Rev. Gail Stearns, dean of Chapman University’s Wallace All Faiths Chapel, said she is not surprised by the community support.

“One of the things that is so important, especially because they were so young and because they were serving our county, is that there is some meaning and that the meaning will move us forward together,” she said. “All these peoples’ outpouring shows that their lives have great meaning.

“Just coming together opens a space for the energy of people to join together as one greater humanity,” she said. “It’s almost invisible, but we feel the energy that brings about love and goodwill, and remember that each life meant something and it will make the world a better place.”

For Evelyn Baltierra and her family, support has been non-stop and has come from around the world. She has received countless phone calls, social media messages, mail, flower deliveries and food donations, she said.

“Words cannot express how much the support, love and prayers have helped my family and I cope with the sudden loss of our dear Bryan,” she said.

“It’s a huge part of the healing process to be seen and to feel the love,” Stearns said. “It helps restore your sense in faith, humanity and living.”

Cooper, a chaplain with the Carlsbad Police Department and pastor of Mission Church in Carlsbad, was asked at the last minute to lead the Camp Pendleton remembrance by Naomi Perez, one of the Marine wives who organized the vigil. Perez’s husband is a staff sergeant and an AAV operator; one of the Marines who was injured, but survived the accident, was his student.

“One of the first things that I try to do when someone has experienced trauma is to get others around them,” he said. “When a community comes together, it magnifies that outpouring. I was floored to see how many people came out at the base. I’ve been part of vigils in the past and have never seen that type of outpouring.”

But the healing to be had there wasn’t only for the families of the dead service members. Marines and sailors from across the base were there.

“That’s what really helped me,” said Evan Bath’s mother, Aleta. “It was amazing to see the support and unity. People think of the “Oorah” of the Marines; they don’t see the family that the military is.”

Bath said quite a few guys from her son’s boot camp attended. They stood in a circle and asked if Bath, her mother and her two nephews could pray with them.

“The mom in me came out and I comforted them,” she said. “I’ll always be a mother of a Marine.”

“There’s so much going on in the world to have these boys honored is important,” Bath added. “They may not have served in combat, but they gave their lives for the country and they deserve recognition.”