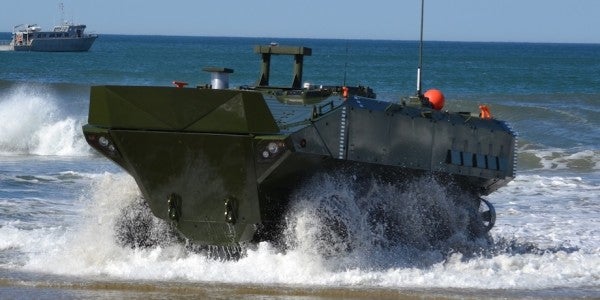 The Marine Corps announced today that BAE Systems will make the service's brand-new amphibious combat vehicle, planned to replace aging tracked amphibious assault vehicles that have been in service since the 1970s.

Additional contract options could raise the value of the deal to $1.2 billion.

Marine Corps Systems Command awarded a contract to BAE Systems to produce and deliver the Amphibious Combat Vehicle. Following a successful Milestone C decision by the Assistant Secretary of the Navy for Research, Development, and Acquisition, the contract options worth $198 million will allow BAE Systems to build 30 low rate production vehicles, which will start delivering in the fall of next year. (Courtesy photo)U.S. Marine Corps photo

BAE, a British defense contractor, was one of two companies the Marine Corps selected in 2015 to build 16 ACV 1.1 prototypes for testing as part of a “lower-risk, incremental approach” to replacing the Corps aging amphibious assault vehicle fleet. The other company that built a prototype was Virginia-based SAIC, which teamed up with Singapore Technologies Kinetics.

“Today, after a rigorous and thorough test and evaluation period of two competing prototypes, we are taking another major step in fielding that much-needed capability to our Marines,” Garner said.

The decision comes after the assistant secretary of the Navy for Research, Development and Acquisition, James “Hondo” Geurts, made the Milestone C decision for the program to move forward yesterday, Garner said.

Milestone C signifies a validation of early testing and clearance to move forward with an operational platform.

ACV1.1 will bring a “modern wheeled capability with land mobility on par with modern battle tanks, along with the remarkable survivability the system has for under-body blast and also other threats,” said Col. Wendell Leimbach, Program Manager for Advanced Amphibious Assault.

The first low-rate initial production vehicles will be delivered to the Marine Corps by the fall of 2019, Garner said, adding that the service will conduct initial operational test and evaluation in late 2020.

The 3rd Amphibious Assault Battalion on the West Coast will be the first unit equipped with the ACV 1.1, Marine Corps officials said.

The Marine Corps plans to buy 204 ACV 1.1 vehicles in this first phase of the effort. Phase Two will be the development of the ACV 1.2, an upgraded amphibious platform, also made by BAE, that the Marines hope field to as a replacement for the fleet of 870 amphibious assault vehicles.

BAE will make some minor improvements to the ACV 1.1 LRIP vehicles before initial delivery, but “there are no issues” in terms of major system capabilities such as survivability, Garner said.

“Quite frankly, we could field the vehicle right now the way it is,” Garner said. “But we will always — as we do with any program — continue to do improvements to it.”