The U.S. Marine Corps says it needs ground-launched missiles that can seek out and eliminate enemy ships sailing in contested waterways 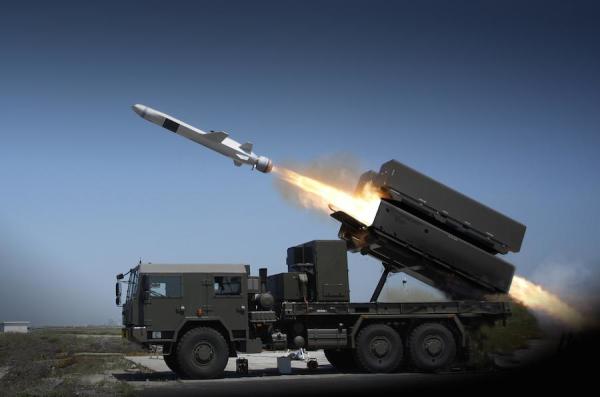 The U.S. Marine Corps says it needs ground-launched missiles that can seek out and eliminate enemy ships sailing in contested waterways.

“Part of the homework that the Navy and Marine Corps have done over the past six months is how we think we're going to need to operate in the future as an integrated naval force,” Marine Corps Commandant Gen. David Berger told the Senate Armed Services Committee on Thursday.

“That means the Marine Corps assumes a role which we have not had in the past 20 years, which is how do we contribute to sea control and sea denial,” he added.

The Marines have practiced striking stationary ships from land and sea with missiles launched from High Mobility Artillery Rocket Systems, but now the service wants to take it a step further and hit ships on the move.

Testifying before the House Armed Services Committee on Thursday, Lt. Gen. Eric Smith, commander of Marine Corps Combat Development Command and deputy commandant for Combat Development and Integration, said the Corps wants a system with an active seeker that can chase down a moving ship, something it doesn't currently have.

“We have to have a system that can go after that,” Smith told lawmakers. “That is what matters in a contested environment in the South China Sea or in the [Indo-Pacific Command] area.”

Changing the calculus of an adversary

The Marines are currently looking at the Naval Strike Missile (NSM), which has a range of roughly 750 nautical miles, as a Ground-Based Anti-Ship Missile (GBASM) solution.

Smith said the service will test fire the system in June.

The NSM is “capable of sea-skimming, high-g maneuverability, and the ability to engage targets from the side, rather than top-down,” according to written testimony submitted to the HASC.

The missile is already deployed aboard Navy littoral combat ships, one of which deployed to the Pacific with the missile last year.

The NSM would be fired from a mobile launch platform based on an unmanned Joint Light Tactical Vehicle called the Remotely Operated Ground Unit for Expeditionary Fires, or ROGUE-Fires, vehicle. The missile and the vehicle together are the Navy Marine Expeditionary Ship Interdiction System (NMESIS), the testimony says.

The GBASM and ROGUE-Fires vehicle are “rapid prototyping and development initiatives” for the Corps, according to documents submitted as part of the service's 2021 budget proposal.

Both have proven successful in war games and simulations, Berger said Thursday.

“Game-changer is probably an over-the-top characterization, but it definitely changes the calculus of an adversary,” Berger said.

The fiscal year 2021 budget proposal included a request for 48 Tomahawk missiles, likely the maritime variant, which appears to be first for the Corps.

“What we need is long-range precision fires for a small unit, a series of units that can, from ship or from shore, hold an adversary's naval force at risk. That missile is going to help us do that,” Berger told the SASC.

The Navy is pursuing a number of long-range anti-ship missiles, among them the Maritime Strike Tomahawk, a maritime variant of the land-attack cruise missile with an active seeker to track moving ships.

Berger said the Tomahawk “could be the answer or could be the first step toward a longer-term answer five, six, seven years from now.”

With the collapse last year of the Intermediate-range Nuclear Forces (INF) Treaty — which banned ground-launched missiles with ranges between 500 km and 5,000 km (310 miles and 3,100 miles) — after the US withdrew in response to alleged Russian violations, the Marine Corps has more freedom when it comes to ground-launched missiles.

Asked if the request for Tomahawks was a result of the US withdrawal from the INF Treaty, Berger said he “would assume so” but “hadn't linked the two together.”

“We just knew we need a long-range precision fires beyond the range that we were restricted to before,” he added.