Marine Corps Commandant Gen. David Berger has ordered all Confederate paraphernalia to be removed from Marine Corps installations, his spokesman confirmed on Wednesday 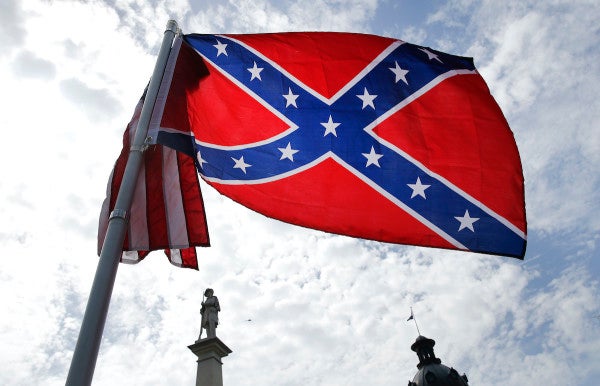 A protester waves a Confederate battle flag in front of the South Carolina statehouse, Thursday, July 9, 2015, in Columbia, S.C.
SHARE

Marine Corps Commandant Gen. David Berger has ordered all Confederate-related paraphernalia to be removed from Marine Corps installations, his spokesman confirmed on Wednesday.

A document showing the commandant’s decision appeared online on Wednesday, though it did not say when all of the Confederate-related paraphernalia needed to be removed by.

Berger’s spokesman confirmed to Task & Purpose that the commandant had sent a directive to his senior staff ordering all installations to get rid of symbols of the Confederate States of America.

“Last week, the Commandant of the Marine Corps directed specific tasks be reviewed or addressed by Headquarters Marine Corps staff,” Maj. Eric Flanagan said in an email. “Many of the tasks were published on Twitter Friday. Other tasks not published previously are mostly administrative matters.”

“Any official policy decisions, changes or implementation plans will be published via appropriate orders and messages,” he continued.

The question of whether Confederate symbols represent heritage or hatred has been vexing for the U.S. military. In January 2016, the Marine Corps refused to allow a man with a large tattoo of a Confederate flag to enlist, yet 10 Army bases are still named for Confederate generals.

Meanwhile, several Marines have been investigated in the past few years for allegedly having links to white supremacist groups, including former Pvt. Vasillios Pistolis, who was kicked out of the Corps after beating counter-protesters at the August 2017 “Unite the Right” rally in Charlottesville, Va.

Two other Marines, Sgt. Michael Chesny and Staff Sgt. Joseph Manning, were discharged after being arrested at a May 2017 pro-Confederate rally in Graham, North Carolina, where they flew a white supremacist banner.

The issue of white supremacists in the military is not limited to the Marine Corps. Alex Fields Jr., who was kicked out of the Army after only four months, sentenced to life in prison in 2019 for using his car to ram counter-protesters at the Charlottesville rally, killing Heather Heyer.

In November the video network Newsy and the investigative website Bellingcat found that eight service members posted on a now deactivated white supremacist message board while they were on active duty.