Almost every operational role and training course in the military is gender integrated, with the exception of Marine Corps boot camp. Lawmakers want to change that 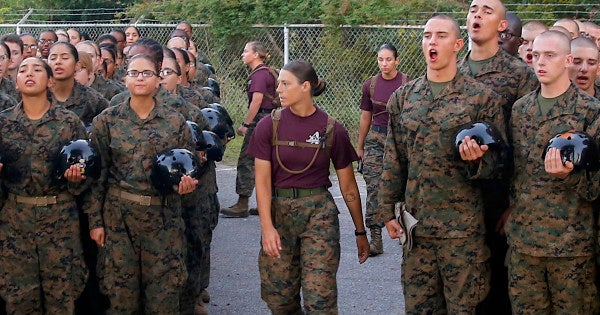 The commandant of the Marine Corps will have five years to stop separating men and women at the service's oldest boot camp, if a new amendment added to the 2020 defense authorization bill survives to ratification.

Rep. Jackie Speier, a California Democrat and chair of the House Armed Services Military Personnel subcommittee, proposed the amendment on Wednesday, which would prohibit gender-segregated training at the Marine Corps recruit depots.

“Training at the Marine Corps Recruit Depot, Parris Island, South Carolina, may not be segregated based on gender,” the measure states. “The Commandant of the Marine Corps shall carry out this subsection not later than five years after the date of the enactment of this Act.”

Speier wants that to change, too. The commandant would have eight years to make training fully coed, the proposal states.

The measure was passed by the House Armed Services Committee by a vote of 31 to 26. Next it must be approved by the full House before moving onto the Senate, where it could face opposition from the Republican majority.

Almost every operational role and training course in the military is gender integrated, with the exception of Marine Corps boot camp, Speier said as she introduced the measure.

“Fully integrating women is not only the right thing to do, it makes our military stronger,” she said. “The women Marines serving in recently opened combat positions that I have met are immeasurably brave, tough, and inspiring. Each of them have had to prove themselves, over and over again, to male peers and superiors.”

That problem can be solved, she said, by having all recruits train together at the start of their Marine Corps careers, regardless of gender.

“If platoons are transformational units, women should be in them,” Speier added. “Having men and women work together from day one shows that they are all Marines.”

“We'll know more once this information has worked its way through appropriate channels,” she said.

This is not the first time the Marine Corps has been told it needs to make its entry-level training fully gender integrated. In 2016, former Navy Secretary Ray Mabus gave the Marine Corps two weeks to submit a plan for coed boot camp.

Male and female recruits spend 65% of boot camp training together, Neller said. That includes time at the rifle range, in the field and in the squad bay.

The Marine Corps has been pushed toward ending its long-held tradition of separating male and female recruits at entry-level training for years. That has been the case as leaders have grappled with ending mistreatment toward women, stamping out sexual assault, and opening all ground combat specialties to female Marines despite requests for exemptions.

In 2015, the Lt. Col. Kate Germano, the officer overseeing the Marine Corps' female recruit battalion, was fired after she said she pushed for better training for women. Marine officials said she was relieved because she was a toxic leader.

Germano's case, and later a book she cowrote with longtime military reporter Kelly Kennedy, offered a glimpse into what she said were uneven training standards at Parris Island.

The recruits lived in different squad bays, but otherwise completed much of their training together.

And in some cases, Neller said they performed better than all-male companies.

“[India Company] scored higher than the average in marksmanship,” he said, “but lower … in water survival training.”

McDonnell stressed that the evaluations can help officials adjust training when required, but they “are not, and should not be, used to assess the 'success' or 'failure' of a training company.”

“Within a company, and within each platoon, Depot training staff ensure that all Marines graduating recruit training meet the rigorous standards for a basically qualified Marine,” he added.

Lt. Gen. David Berger, who will soon replace Neller as the Marine Corps' commandant, told lawmakers during his confirmation hearing that having the men and women train together at Parris Island “went great.”

“We have to look at this for perhaps next year, Berger said. “… I think it's a discussion … the Marine Corps will have.”

SEE ALSO: How The Marine Corps Could Lead The Way In Military Gender Integration