Marine Corps boot camp is considered one of the most difficult basic training programs of the U.S. military. From the... 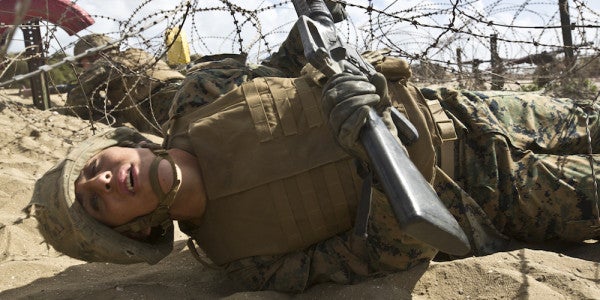 Marine Corps boot camp is considered one of the most difficult basic training programs of the U.S. military. From the moment new recruits arrive to the day they graduate as Marines, they face grueling physical and mental challenges that are designed to drive them to their limits and beyond.

But when 29 recruits were admitted to the hospital last year, doctors in the Navy Preventive Medicine Department at Naval Medical Center San Diego knew something wasn't right.

So they called in the Centers for Disease Control and Prevention, which led a joint investigation to determine the cause of the recruits' shocking symptoms, which ranged from stomach cramps and nausea to bloody diarrhea and seizures — symptoms that were life-threatening in some cases.

In the investigation report obtained by Business Insider, the CDC highlights a number of problems at Marine boot camp that heightened the risk and severity of an outbreak.

In August 2018, attorneys for three former Marines filed lawsuits against food service company Sodexo that prepares meals for recruits at Marine Corps Recruit Depot San Diego, one of the two sites where enlistees enter the Corps' 13-week boot camp. Court filings describe the tragic consequences faced by the recruits, all three of whom were ultimately discharged due to their medical conditions caused by the outbreak.

The lawsuits allege that Sodexo is responsible for the source of the E. Coli, and claims that food service staff served undercooked ground meat to the Marines. While the CDC report does not identify the source of the outbreak with 100% certainty, inspectors reported they observed unsafe meal preparation procedures, some of which violate FDA and California Department of Public Health standards.

The CDC's trace back procedure led inspectors to ground beef as the most likely source. During the investigation, inspectors noted that while food service staff periodically checked the temperature of ground meat while cooking, they did not utilize standard cooking times.

Posted cooking temperature guides were inconsistent with food industry standards, the report indicates. The guides, observed during the inspection, directed employees to cook ground beef at 155 F—but did not provide a minimum cooking time at that temperature.

The California Department of Public Health recommends that ground meat should cook at that temperature for a minimum of 15 seconds.

Despite the posted signs, CDC inspectors noted that some food service employees were unaware of appropriate cooking temperatures and times. The inspectors honed in on these unsafe practices after Marines indicated in questionnaires and interviews that it was common to encounter “grossly undercooked” food. The Marines noted that on several occasions, drill instructors would tell recruits to throw away food that appeared unsafe.

Recruits are expected to re-stock their own bathrooms and rarely do so the CDC report states. Investigators' notes show that during interviews, recruits said they often ran out of toilet paper, sometimes leaving them with no choice but to use their hands.

They also often ran out of soap and paper towels, rendering it impossible to properly wash and dry their hands. According to the CDC's advertised hand-washing techniques, these steps are critical to helping prevent the spread of germs and disease.

Marine spokesman Posy wrote that since the outbreak, training staff has reinforced efforts to ensure these supplies remain stocked and emphasize the importance of hygiene. He also said that although the illnesses “prompted remedial measures,” the depot has consistently stressed the importance of hand-washing and that the Marines “remain committed to the health and welfare of our recruits.”