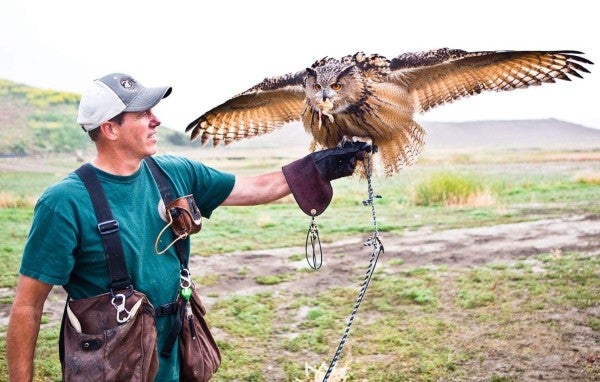 Marine recruits training on the East Coast might have to deal with pesky sand fleas, but those on the West Coast are facing off against bigger pests: aggressive seagulls.

“The gulls interfere with outdoor training on obstacle courses [and] confidence course, and cause damage to electrical connections on solar panels and stucco on historic facilities,” Capt. Martin Harris, a spokesman at the training depot, said. “During the nesting season, April to July, they become aggressive and can attack personnel and visitors aboard the depot.”

In a call-out for services posted by the Navy Department last month, the Marines said they wanted a contractor to “provide falconry services to conduct hazing activities around the recruit training areas and recruit mess hall.”

“We use the predator-or-prey relationship that's been established for millions of years,” Chavez said.

He and his team will spend 30 straight days at Marine Corps Recruit Depot San Diego and then a little more than three weeks as needed throughout the rest of the year. The falconers' Harris hawks, big raptor birds that typically live in desert regions, are trained to grab a fake seagull pulled by a remote-controlled car.

“They freak out when they see it,” Chavez said of the seagulls.

This isn't the first time Adam's Falconry Services has worked on a military base. Chavez said the needs are common in California, where he also chases out birds nesting in big satellites on Fort Irwin in San Bernardino County and ravens wreaking havoc at Marine Corps Air Ground Combat Center in Twentynine Palms.

Chavez said the seagulls are creating an unhealthy environment for recruits in San Diego.

“They're coming in and nesting, they [could attack] the recruits and they're defecating on the premises,” he said.

Harris said no recruits have been injured by the birds directly, but their excrement creates safety issues on walkways, bleachers and other gathering spots for the roughly 18,000 trainees and 90,000 visitors that go to the base annually.

Chavez and his team go up onto rooftops at the depot to clean up nests and other messes the gulls are causing. They try to work around drill instructors' plans, so they don't interfere with any training, he added.

The Navy Department's solicitation for the falconry services gives the OK for pellet guns to be used against the seagulls. Chavez said that's occasionally necessary when dealing with a particularly aggressive bird, but they work to avoid that.

“It's about harassment,” he said. “it's not about going out and killing stuff.”

The Marine Corps has used “several different passive and active deterrents” to get rid of the seagulls over the past four years, Harris said, to include falconry

The hope is to get the seagulls to relocate to Catalina Island, northwest of the training base. Since the gulls have been nesting at the recruit depot though, it might prove tough to get them to stay away.

“If they've been coming back for years, that's obviously going to be a harder place to move them out of as opposed to a new site,” Chavez said. “We might have more of a fight on our hands in places like this.”