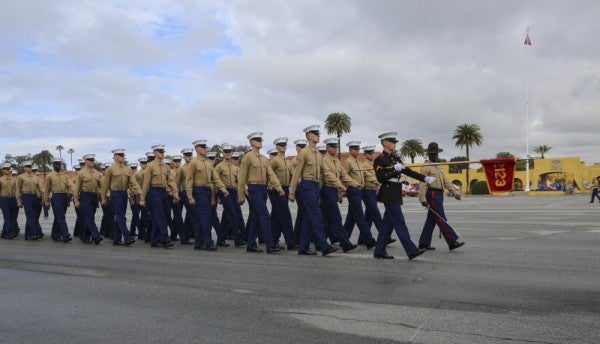 Family day was supposed to be today but has been canceled. On Friday Marine graduates will leave the base after graduation and can meet with their families at that time, according to the Facebook post.

Graduations at the Parris Island, South Carolina boot camp also are suspended, according to a Marine spokesman.

The depot resisted closing its ceremonies to the public after the Navy and Air Force canceled theirs earlier this week, saying Tuesday that the depot was following guidelines from the Centers for Disease Control and Prevention.

“We apologize for the inconvenience, and appreciate your frustration,” the post said. “There are no cases of COVID-19 here at MCRD San Diego, and we must remain cautious and focused on the public's safety while continuing to Make Marines.”

At least 1,000 people were expected to attend the graduation of about 400 new Marines.

A Marine at Marine Corps Air Station, Miramar has tested positive for COVID-19 on Wednesday, a military source said.

On Monday, the Navy announced on Facebook it is canceling all public recruit graduations at its Great Lakes, Ill., boot camp to prevent the potential spread of COVID-19 to either recruits or Navy families, out of “an abundance of caution.”

It also canceled recruit liberty, in which newly graduated sailors are allowed to spend graduation weekend off base. Instead, according to the Recruit Training Command's post, sailors will report directly to their follow-on assignments.

On Tuesday, the Air Force followed suit, saying that families will not be allowed to attend its boot camp graduation ceremonies.