Marines have joined the fight against California’s raging wildfires 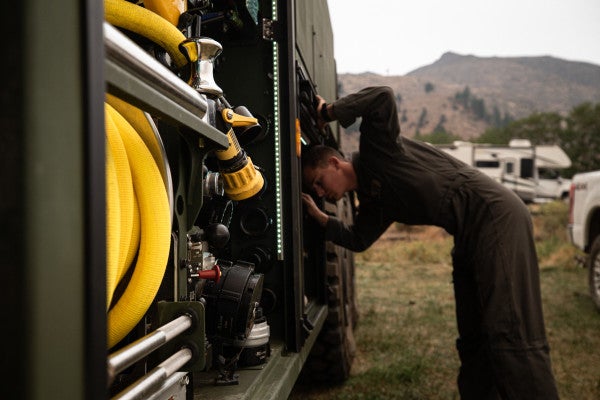 Marines with the 3rd Marine Aircraft Wing are assisting with the Slink Fire in the Sierra Nevada.

The fire first broke out on Aug. 29, in the Slinkard Valley southwest of Topaz Lake. It had burned nearly 22,000 acres and was 36% contained as of Tuesday afternoon, Sept. 8. Lightning strikes caused the fire, officials said.

The fire’s location is near the Mountain Warfare Training Center in Bridgeport and the base was evacuated when the fire first broke out. Since then, Marines and sailors, along with the air wing, have helped local fire agencies combat the growing fire.

“This is an opportunity for us to assist with California fire suppression, and remain ready and responsive to emerging requirements of our surrounding population,” Lt. Col. Kurt Boyd, the squadron’s commanding officer, said.

The center, with training areas that range in elevation from 6,762 feet to just under 12,000 feet, is one of the Marine Corps’ most remote bases. Marine units from Southern California train there during summer and winter for upcoming deployments and to become familiar with austere terrain that might be encountered in combat.

It was established in 1951 with a mission of providing cold weather training for replacement personnel bound for Korea.