"Just don't look dumb in front of the Marines and don't throw up." 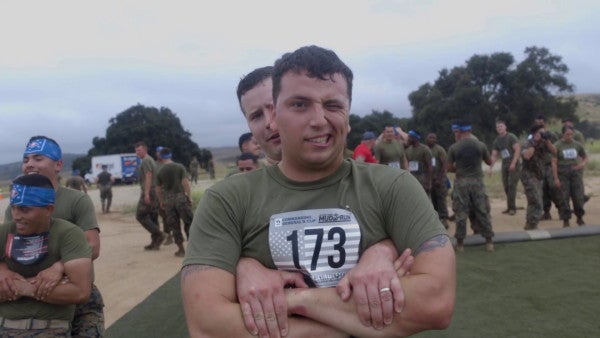 The 30-year-old Los Angeles County man had just run nearly five miles — facing numerous obstacles — and ended up at the so-called Triple Threat of the annual Mud Run at Camp Pendleton. He walked through a roughly 43-foot mud pool, then jumped over a 5-foot wooden barrier, into another mud pool, got back on land, went into another mud pool, crawled through an 18-foot rubber tube, and then started running again. He had another 1.2 miles to go.

Nelson Pringle is a connoisseur of mud runs, a type of obstacle course race similar to military training, and was participating in his eighth. He said the challenge of mud runs are what keeps him interested and coming back.

“I normally hate running,” he said.

Roughly 7,500 people participated in the 26th annual Mud Run on Saturday and Sunday, a rare opportunity for the public to come on one of the nation's largest Marine Corps bases. The run is organized by the Marine Corps Community Services department, with money earned going toward recreational activities for Marines on base and their families.

The route is mostly around Lake O'Neill, a small part of the 125,000-acre base. Away from the track was expansive grass plains showing very little human activity

— a stark contrast to a flurry of excitement around the lake with speakers blaring Survivor's “Eye of the Tiger” and other pump-up songs.

Obstacles included crawling under a camouflage net through mud, climbing over walls, doing lunges and push-ups with Marines looking on and other mud-infused activities. Participants had the option of running a 10K, 5K or a 2K for children 6 to 12 years old. There were more than 300 Marines cheering on runners throughout the course.

“Civilians love to come on base,” said organizer Jimi Bertagnoli. “It's great for community relations.”

Private first class Paul Giorgio, 19, had the job of directing runners after the finish line into a Dr. Bronner's washing facility where soap foam was

sprayed on participants and then hosed off by warm water. This took place as Dr. Bronner's employees danced outside the washing station. Giorgio said he was impressed by the Mud Run course, saying it reminded him of his own training.

“Everything on the map looks pretty familiar to me,” he said.

Christine Sanchez, 27, of Orange County, crossed the finish line with mud all over her face and clothes. She said the hardest part of the race was not the mud obstacles but running for long distances under the sun. Running conditions were perfect at the start of the 10K in the 60s with overcast skies. But, shortly after the race began, the sun came out and it warmed up to around 70 degrees.

Sanchez had run the race before, in 2014, and was part of group of 20 people from automotive marketing firm Shift Digital. She said last time she was dirty for days.

Her strategy this time was simple: “Just don't look dumb in front of the Marines and don't throw up.”

A lot of participants were part of groups. A group of women who know each other from River Run Farms horse training facility in Lakeside all wore green “Be Incredible” shirts featuring Marvel Comics' Hulk. Their game plan was to stick together and not get lost.

There were plenty of kids ready to get mucky, encouraged by parents, unlike usual. Charlie Williams, 9, of Poway, was wearing a pink outfit with a shirt that said “Superstar” in glitter. She was defiant that no preparation was required for the Mud Run: “We're only kids. We don't have to train.”