The Marine Corps has taken "administrative action" against Cols. John Atkinson and Douglas Lemott Jr., officials said. Both officers were recently found guilty in two Virginia county district courts after they'd been arrested in April and charged with driving while intoxicated 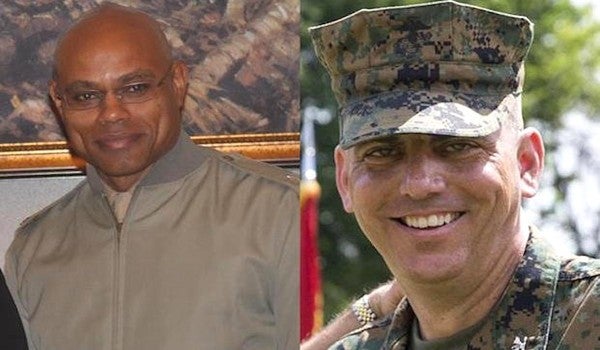 A pair of Marine colonels who were separately arrested and charged with drunk driving earlier this year have been hit with administrative reprimands, Military.com has learned.

The Marine Corps has taken “administrative action” against Cols. John Atkinson and Douglas Lemott Jr., officials said. Both officers recently had cases adjudicated in two Virginia county district courts after they'd been arrested in April and charged with driving while intoxicated.

Marine officials would not disclose the types of administrative action taken against the former commanding officers, who'd been removed from their jobs. Administrative reprimands can range from letters of warning to career-ending nonjudicial punishments.

“As a matter of policy, we won't discuss the details of those actions,” said Capt. Héctor Alejandro, a spokesman for Marine Corps Cyberspace Command, where Lemott serves.

Neither colonel could be reached for comment. It was the first drunk driving charge for both officers.

Atkinson was removed from his job as commanding officer of Headquarters and Service Battalion in Quantico, Virginia, in April. He was found guilty in Prince William General District Court on Aug. 16 of reckless driving, a misdemeanor.

“Following Atkinson's civilian conviction, the adjudication of the circumstances that led to his relief were resolved with administrative action,” said Jeku Royce Arce, a spokesman for Marine Corps Installations Command.

Atkinson is currently assigned to the Marine Corps Warfighting Laboratory at Quantico, Arce said. For six months, he is allowed to use his license only to go to and from work, an alcohol safety action program, a place of worship and a few other court-approved locations, according to legal records.

Lemott was relieved of his duties as commanding officer of Marine Corps Cyberspace Operations Group in May. He was found guilty in Fauquier General District Court on Aug. 12 of driving while intoxicated.

He was given a year of supervised probation, and for 12 months he will have a device in his vehicle that will test for alcohol use, court records state.

Lemott's license will also be limited to work use, medically necessary travel, and a few other approved locations. He was ordered to pay a $250 fine.

Lemott was arrested April 28. He is currently assigned to the staff of the deputy commandant for information at Headquarters Marine Corps, Alejandro said.

It's not immediately clear whether either colonel is facing an early retirement as a result of their arrests. Phil Cave, a Virginia-based military defense lawyer who has represented troops all over the world, said it's possible the officers will face boards of inquiry that will recommend whether they should be separated under other-than-honorable conditions or forced to retire at lower ranks.

The officers could also be at risk of losing their security clearances, Cave said.

It's not uncommon for officers or enlisted personnel who've been arrested for drunk driving to face administrative actions, he added.

“On the surface, it can look like they're being treated lightly,” Cave said. “But there are often more shoes to drop after their civilian convictions.”

Commandant Gen. David Berger, who became the Marine Corps' top officer this summer, stressed in his planning guidance that he finds the rates of drug and alcohol offenses, along with other misconduct, to be unacceptable.

Over the last decade, the force lost 11,765 Marines to drug and alcohol offenses, he wrote.

“This must change,” Berger said.