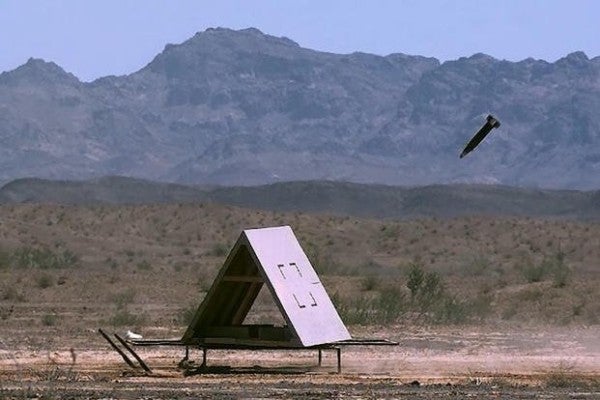 The Excalibur is a combat-proven, precision artillery round capable of hitting within a few feet of a target at ranges out to 40 kilometers, the company said.

The new Excalibur S uses the same GPS technology as the Excalibur 1B variant but adds a semi-active laser seeker to engage both moving land and maritime targets.

“The seeker technology will recognize that the target is no longer there, and it will pick up the laser energy from where the target is and redirect itself to that,” Trevor Dunwell, director of Raytheon's Excalibur Portfolio, told Military.com.

In a U.S. Navy test, Raytheon fired two projectiles from an M777 155mm Howitzer at a moving target at Yuma Proving Ground, Arizona, and scored two direct hits, he said.

“This happened in April of last year; we had to keep it close-hold working with the Navy … more specifically for the Marines,” Dunwell said. “We set the round for a specific location, we fired it off and, as soon as the round got fired, then the target started moving. It realized the target wasn't there and realized that it had moved somewhere else and … it switched from GPS to laser designation and then engaged the target.”

The Marine Corps is interested in the Excalibur S round but “has not currently placed an order,” he said.

The next step is to conduct more tests this year. Dunwell would not reveal when they will occur, nor would he divulge which service will sponsor the next test.

If the Marine Corps or the Army decides to purchase the new Excalibur S round, Dunwell said it would not be priced dramatically higher than the current Excalibur 1B, which costs roughly $70,000 per round.

The new technology would be effective for use in counter-fire artillery missions, he said.

“If you think about it, it is critically important because you are going to have to engage moving targets … especially if you are doing counter-fires,” Dunwell said. So, if it's a fire-and-move, now on the counter fire you should be able to engage that moving target.”