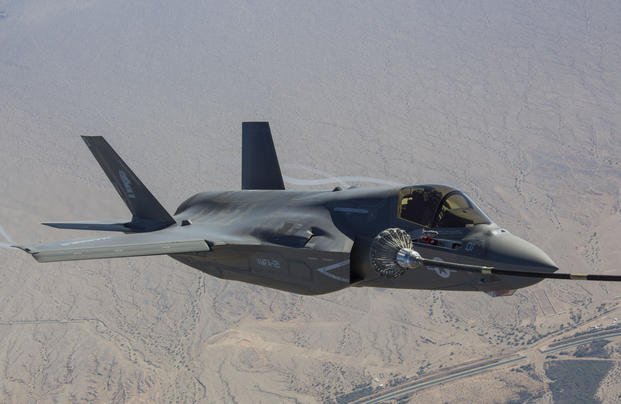 Editor’s note: This article by Gina Harkins and Oriana Pawlyk originally appeared on Military.com, a leading source of news for the military and veteran community

The F-35B pilot was able to eject successfully and is being treated, said 1st Lt. Brett Vannier, spokesman for Marine Corps Air Station Yuma in Arizona. The KC-130J made an emergency landing in a field near Thermal Airport, roughly 130 miles northeast of San Diego, according to local news reports.

All nine personnel — one in the F-35B and eight in the KC-130J tanker — are accounted for.

“There are some mild injuries that are being treated, but they are all safe,” Vannier told Military.com.

The personnel are assigned to the Weapons and Tactics Instructor Course, Vannier said. It’s not immediately clear whether those involved were students or instructors or from where the aircraft took off.

Weapons and Tactics Instructor Course is hosted by Marine Aviation Weapons and Tactics Squadron One at Yuma. Aviators attend the course, where they face a series of escalating training events that cover advanced air and ground tactics.

The accident involving the short takeoff/vertical landing F-35 variant occurred at 4 p.m. local time. The cause of the collision is under investigation, Vannier said.

This marks what will likely be the third Class-A aviation mishap for the Marine Corps in fiscal year 2020, which started Oct. 1, 2019, and ends Wednesday.

Earlier this month, a CH-53E made an emergency landing in North Carolina after an engine fire broke out. The crew was able to get out of the aircraft safely.

In May, a civilian skydiving plane collided with a parked MV-22B Osprey in San Diego. There were no injuries reported.

A similar Marine refueling exercise involving a KC-130J and F/A-18D Hornet left six dead in 2018. That collision took place during a nighttime exercise off the coast of Japan.